It’s not a stretch to say that the future of wearable technology lies in elastic electronics and springy sensors that fold and flex like regular fabric. Though currently available wearables have not yet reached that stage, some recent research breakthroughs are encouraging signs of the kind of smart clothing that might one day hit consumer shelves.

Swiss researchers at the École Polytechnique Fédérale de Lausanne (EPFL) recently developed thin electronic circuits that can be stretched up to four times their original size and easily conform to a person’s body shape and movement. The circuits are made by coating liquid metal with a flexible polymer able to conduct electricity. They can be stretched a million times without cracking or malfunctioning, according to an article published by the researchers in the journal Advanced Materials. The circuits have applications for artificial skin, connected clothing and on-body sensors. 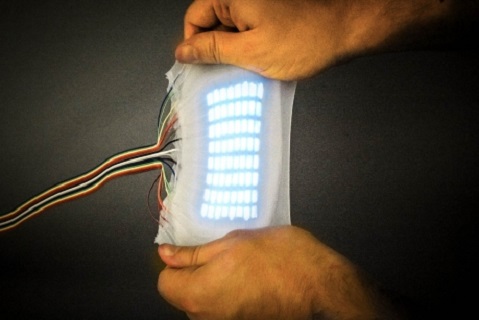 Over at Cornell University in New York, a team of graduate students led by Rob Shepherd, assistant professor of mechanical and aerospace engineering, were inspired by the octopus when they developed an electroluminescent “skin” (pictured above) that stretches over six times its original size, while still emitting light. They published their invention in a recent issue of Science. The researchers say their hyper-elastic light-emitting capacitors (HLEC) have implications for health care, transportation, electronic communication and other disciplines.

“You could have a rubber band that goes around your arm that also displays information,” says graduate student Chris Larson in a story by the Cornell Chronicle. “You could be in a meeting and have a rubber band-like device on your arm and could be checking your email. That’s obviously in the future, but that’s the direction we’re looking in.”

Below is a video of the stretchable circuits created by EPFL researchers: