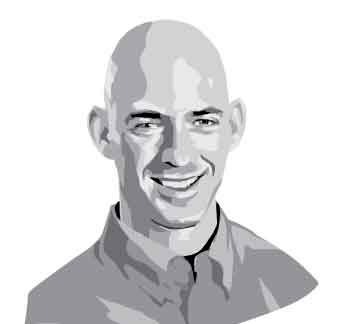 Jeremy Lott, of course, leads SanMar – an estimated $2.4 billion apparel powerhouse that has won constant awards and accolades for its product quality and customer service. It’s far and away the largest company in the promotional products industry, having grown tremendously since Lott took over as company president in 2013 before adding the title of CEO two years ago. Naturally, that makes Lott a very big deal in the promo industry.

Talking to him, however, you would never know it.

Mild-toned, calm, considerate, open and articulate, the president of Issaquah, WA-headquartered SanMar exudes a personability and humility that belie his status. In a conversation centered around his accomplishments and standing as the most powerful person in the promotional products industry, Lott continually redirected praise to SanMar’s 4,000 employees while expressing gratitude to his company’s distributor customers.

Still, it’s this particularly intense focus – evolving to exceed clients’ expectations and empowering SanMar’s people to be both happy and at their best at work – that’s the key to both Lott’s stellar success and that of his family-owned business.

“SanMar is an exceptional company, and so much of that is due to Jeremy’s leadership,” says Craig Nadel, a Power 50 member and president of California-based Top 40 distributor Jack Nadel International (asi/279600). “He’s smart, down-to-earth, kind – a truly decent person and a leader for our entire industry.”

A Lifetime in Promo
Lott has promo in his DNA.

His father Marty, a universally respected industry luminary that led SanMar for decades, started the supplier firm in 1971. When Jeremy was a child, SanMar was a small family business, and the Lotts all pitched in. Jeremy would go to the office on the weekends with his dad and stuff invoices into envelopes at the kitchen table come evening. “Kids are free labor,” jokes Lott, who appeared on the cover of SanMar’s first ever catalog when he was only two years old.

As Lott grew, his father saw that he had a keen interest in and aptitude for the business. Marty nurtured this, assiduously mentoring Jeremy. That included bringing the budding businessman to industry trade shows where he’d hand out catalogs and interact with customers. Jeremy, now in his 40s, remembers fishing trips to British Columbia that SanMar would host for executives from apparel mills in the late 1980s and early 1990s. He was just a teen, but Jeremy would be engaging with powerful CEOs – while doubling as a bartender. “I learned to make a good Bloody Mary,” he says with a laugh.

Of course, Lott learned much more than that: He learned how to build business relationships, the importance of strong partnerships and the necessity of superior customer service. None of it felt like work. It was fun. “My dad got me involved in the business in a very positive way,” Lott says. “That early exposure was really impactful in influencing me to make this business my career.”

The second-generation SanMar leader credits both his father and mother for being heavily invested in his development as a person and nurturing his professional success. He lauds his father for being both farsighted and humble regarding the business he founded.

“My dad realized early on that if he wanted the family business to go on, he had to mentor me and he did that fantastically, always giving his time and energy,” says Lott, who holds degrees from Emory University and Northwestern University’s Kellogg School of Business Management (MBA). “I’ll always be in debt to him for the position I’m in today.”

Marty says it’s been a pleasure to watch Jeremy develop. “Jeremy is very much his own man,” says Counselor’s 2020 Lifetime Achievement Award recipient. “He is aggressive in a kind and humble way. He compassionately listens to others to understand their point of view. He is continually educating himself. His communications skills are extraordinary. Because of these traits, he’s a highly respected, effective leader.”

As Marty’s comments make clear, it would be a mistake to think that Jeremy Lott is simply carrying on something his father started. Since formally joining SanMar in a professional capacity nearly 20 years ago, Lott has imprinted his own indelible mark on the company and industry, spearheading SanMar’s evolution from a clothing distributor into a full-blown apparel business – one with a global footprint that’s a leader for promo in design, merchandising, sourcing, company culture, sustainability and corporate social responsibility.

“The industry needs visionaries, people of integrity and leaders who are focused on stakeholder value, not just shareholder value. Jeremy epitomizes those high standards,” say Danny Rosin and Robert Fiveash in a joint statement.

“Our employees were all in on how to help the company survive and get through the pandemic. That’s due to the culture we have here.”

The pair, who are co-presidents of North Carolina-based distributorship Brand Fuel (asi/145025), continue: “He embraces innovation and differentiation in a highly commoditized space. And, he understands the importance of the extended work family – and that if you take great care of your staff, it makes running a complex business a lot easier. His leadership in supplier corporate social responsibility should be admired and replicated.”

Founded thanks to Lott, SanMar’s Canvas For Good is a holistic initiative that encompasses everything from ethical sourcing and more environmentally friendly manufacturing practices and end-products to highlighting stories of branded apparel’s role in helping build teams, unite communities, support worthy causes and more.

SanMar has set strong benchmarks through its Global Operating Principles to ensure factories it sources from are meeting standards on worker treatment and environmental practices. The supplier proactively monitors partners for compliance. SanMar’s commitment to CSR is backed up by the company being part of the Fair Labor Association, a collaborative effort of socially responsible companies, colleges/universities and civil society organizations that strive to improve working conditions in factories.

Additionally, Lott has led SanMar toward exciting eco-inspired innovations. These include efforts to significantly reduce the amount of water and energy needed to produce apparel, as well as the introduction of greener products like T-shirts made completely from recycled scraps left over from the production of other T-shirts.

“Under Jeremy, SanMar has become a global leader in responsible sourcing and reducing manufacturing’s impact on global warming,” says Memo Kahan, owner of Los Angeles-based Top 40 distributor PromoShop (asi/300446). “Our industry – and the world – are better because of Jeremy and the impact he’s had.”

A Path Through the Pandemic
During COVID-19, Lott has further proved his mettle as a leader.

When SanMar’s promo business virtually disappeared overnight, Lott powered the supplier’s pivot to PPE, leading the company to contracts that saw the firm produce about 200 million face masks for the federal government.

Even so, at COVID’s outset, times were tough. But thanks to savvy financial stewardship that created a strong balance sheet, SanMar was in a better position than most to weather the storm. Costs still had to be managed, but Lott determined not to lay anyone off. Instead, he stopped taking a salary. Hours and wages for employees were reduced – a decision that gutted Lott (“It’s painful – I realize what that means to working families with bills and mortgages,” he says) but one that was nonetheless necessary. He also collaborated closely with overseas manufacturers to establish plans that would work for SanMar and help keep the vital partners viable amid the dearth of orders.

Ultimately, thanks to the PPE pivot and the return of more traditional promo business, SanMar brought all employees back to normal hours and wage levels within months. “Everyone has sacrificed,” says Lott, “but we’re getting through this together.”

That SanMar is doing so well is down to the strong culture Lott and the supplier’s leadership have established. (It should come as no surprise that Lott’s favorite quote is “Culture eats strategy for breakfast.”) Encapsulated by the company mantra “Business Is Personal,” the culture is one in which employees are amply trained, supported and valued. In turn, they’re passionately motivated to give their best to customers.

The results of the approach are evident in SanMar’s multibillion-dollar revenue totals and five-star supplier rating in ESP. They’re also evidenced by the fact that when the pandemic belt-tightening initially occurred, employees started a Facebook page centered on the theme of “SanMar Strong,” where they came together.

“There was an outpouring of communal support. Our employees were all in on how to help the company survive and get through the pandemic,” says Lott. “That’s due to the culture we have here. It starts with me and my dad and permeates the organization. There’s a true family atmosphere – one in which we care about each other and our customers on a personal level.”

Not surprisingly, the family ethos informs Lott’s own household. He and his wife are parents to six children. Balancing family with the obligations of running promo’s largest company requires adaptability, patience and an ultramarathoner’s energy. But just like his father before him, it’s a magician-like juggling act that Lott pulls off with aplomb.

“Spending time with my family, especially outdoors – hiking, skiing, boating – it’s how I re-center,” he says. “Having a large family is way more fun than you might think.”

The heart of a family man, an executive doing business ethically, leading change for the greater good – for sure, sometimes nice guys do finish first. “I can’t wait to see what else Jeremy brings to our industry,” says Kahan. “He’s always working for the betterment of it.”

What one hobby or activity has kept you sane during the pandemic?
JL: Hiking.

Outside of the people in your house, who did you speak to the most during the shutdowns? JL: SanMar CFO Paul Whyatt. We spent so much time, especially early on in the pandemic, trying to plan for the business when things were changing rapidly.