Here are some key takeaways from this year’s comprehensive swag report, including crucial data about mask usage.

Just over half of consumers would look on an advertiser more favorably if they received a logoed mask from them, and 57% would be more likely to do business with a company that gave them an imprinted mask. That said, only 39% of consumers report owning a logoed mask currently – a gap that promotional products suppliers and distributors can help bridge.

Those are just a few of the key findings in the 2020 ASI Global Ad Impressions Study, which each year generates powerful data proving that promotional products are the most high-impact, cost-effective advertising medium. This year’s study is based on tens of thousands of in-person and online surveys taken by consumers in the U.S. and Canada – including the data on mask use and perceptions which was gleaned from surveys conducted in mid-August.

Below are seven of the biggest highlights from the 2020 Ad Impressions Study. You can download a copy of the full free report here.

1. The vast majority of Americans are wearing masks in public.

With the coronavirus pandemic pushing past the six-month mark throughout the U.S. and Canada, mask mandates have become an accepted part of daily life for most people. Consumers are used to seeing them and wearing them, and the idea of donning a branded or decorated mask has more appeal than it did at the beginning of this public health crisis. In fact, 63% of those surveyed report wearing a mask anytime they’re in public, and 80% say they wear masks in public most of the time.

2. Consumers are more than willing to wear logoed masks.

Promo masks generate 4,235 impressions over their lifetime, with 52% of consumers saying they would keep a logoed mask for more than three months.

More than half of consumers report keeping some of the promotional products they’ve received for at least five years, and 40% of consumers have kept a promotional item for over a decade. Clearly, useful, attractive and well-thought-out promo items are valued by consumers – bringing a positive brand perception each time they’re worn or utilized.

4. A significant portion of consumers are willing to pay for promo.

We’re living in the age of merch – where fast-food restaurants release coveted, limited-edition fashion collections and even institutions like the Post Office are selling branded crop tops online – so it just makes sense that consumers see the value and are willing to shell out their own hard-earned cash for a promotional item advertising a brand they identify with. In the last year, nearly a quarter of consumers say they’ve paid for a promotional product. Consumers in the Midwest (28%) were the most likely to spend money on logoed items, while those in the West (19%) were the least likely.

5. Sustainability is a growing trend.

The number of consumers who look more favorably on an advertiser that gives them an environmentally friendly promotional product is approaching the halfway point. Nearly a third of people 55 and older say they’ve purchased more products with an environmental bent in 2019, compared to 2018. Almost a third of women, overall, reported increasing their environmentally conscious spend last year, relative to 2018.

6. Made in the USA is important to baby boomers.

When it comes to where a promotional product is manufactured, a solid 57% of consumers say they would look more favorably on an advertiser that gave them an item made in the USA. Among the 55 and older crowd, that percentage jumps up to 70%.

More than a quarter of consumers overall reported purchasing more American-made products in 2019, compared to 2018. For those 55 years and older, 32% reported an increase in made-in-the-USA spending last year, over 2018. 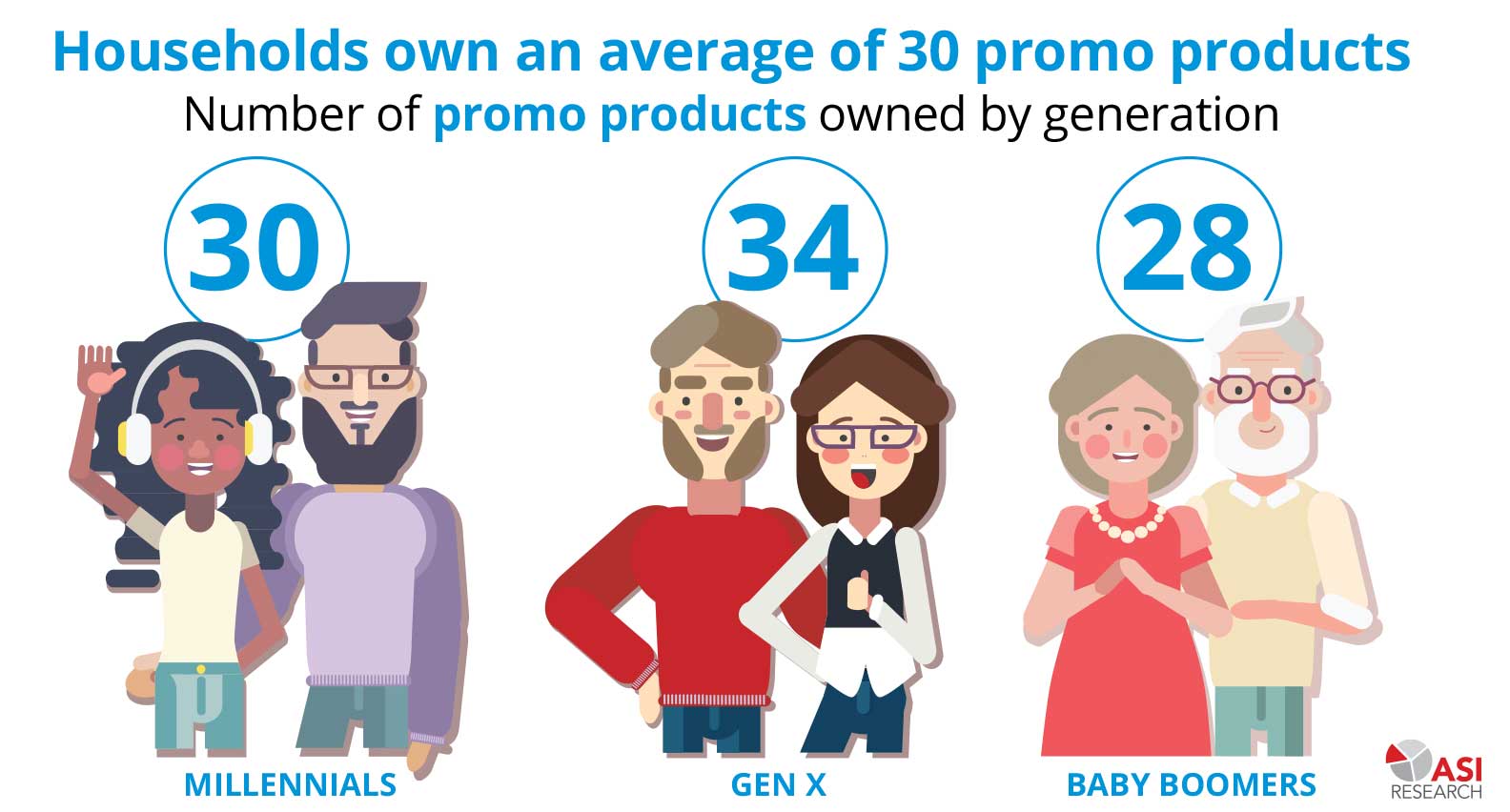 7. Gen Xers own the most promo products.

Considering that the Ad Impressions Study shows that promotional products are the most highly regarded form of advertising – over newspaper, radio, magazine, television, internet and mobile – it makes sense that consumers would be willing to keep dozens of promotional items in their homes for long stretches of time.