It’s official. The first pop-up shop of the Democratic National Convention (DNC) is open, just three weeks before the massive political event is expected to bring an estimated 50,000 people to Philadelphia. Officials from the host committee and merchandising partner Impact Dimensions (asi/230321) were on hand July 6 for a ribbon-cutting ceremony.

“We realized there was a lot of excitement in the community about the convention, and we wanted to do our best to enhance that with our local artists and really make it fun,” host committee Executive Director Kevin Washo said at the event. “Now we wanted to roll out our apparel and gear, so everyone can come and shop and become a part of the convention. I think it’s pretty refreshing and pretty hip.”

Open through Aug. 5, the 400-square-foot shop in the concourse of the Comcast Center in Philadelphia is packed with logoed T-shirts, hats, buttons, drinkware and accessories, with designs centered around the theme “Philadelphia 2016.” All of the items are American-made, according to Luis Liceaga, president of Impact Dimensions. “We tried to use local sources as much as possible to have a positive impact on the community,” he noted. In addition to producing the official host committee designs, Impact Dimensions worked with seven local artists to create unique images celebrating Philadelphia and its history.

“This is such an amazing thing that they’re doing for artists in Philadelphia,” said Brett Bender, one of the artists whose work is featured on the merchandise. “There’s so much amazing talent in Philadelphia, and it’s really nice that they’ve chosen some people to go forward with this.” For this year’s DNC, Bender created an image of a blue donkey wearing red high heels and lipstick, with the words “It’s time” underneath.

Another artist, Dan Duffy, of Philly Word Art, said he feels honored that his art will be a part of the historic event. He created a text illustration of the city’s iconic Love sculpture. The design, made up of words like “Independence Mall,” “Benjamin Franklin,” “Diversity” and “Cheesesteak,” took Duffy about 40 hours to complete. Instead of highlighting partisan buzzwords, Duffy said he tried to keep the design “as neutral as possible,” focusing on concepts like democracy and liberty, as well as calling out city landmarks and popular locations. This is the second time Duffy’s art has been used on a mass-market T-shirt. At a hockey game earlier this year, the Philadelphia Flyers gave away 20,000 tees, featuring Duffy’s depiction of the team logo composed entirely of players’ names and other Flyers-related verbiage, to fans attending the game.

Earlier this month, Impact Dimensions launched its online store, featuring many of the same items in the brick-and-mortar store. 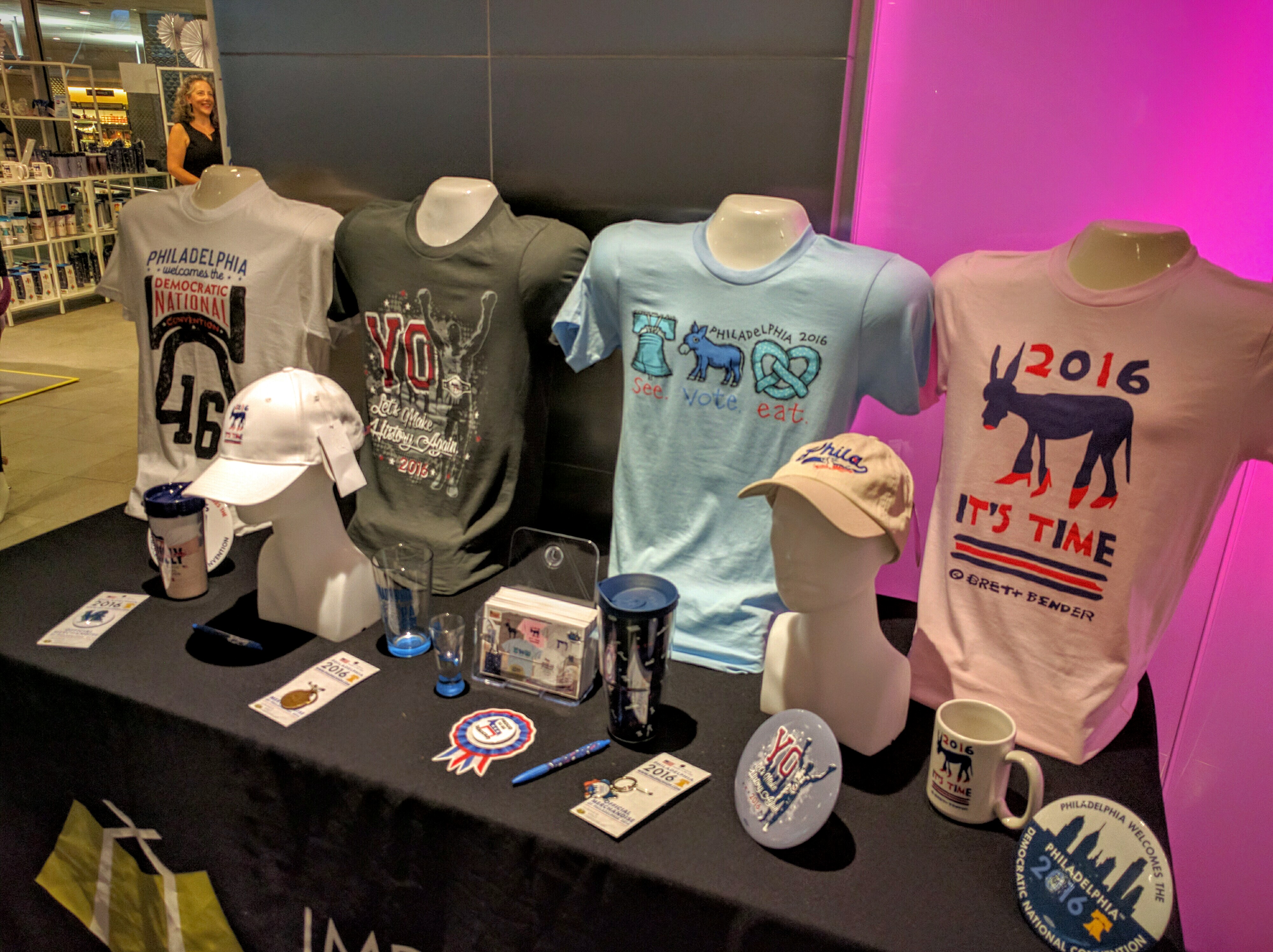 A display table was set up outside the Philadelphia DNC host committee pop-up shop in the Comcast Center.

Dan Duffy of Philly Word Art created an image of the iconic Love sculpture, composed entirely of words relating to democracy, liberty and the "City of Brotherly Love and Sisterly Affection." 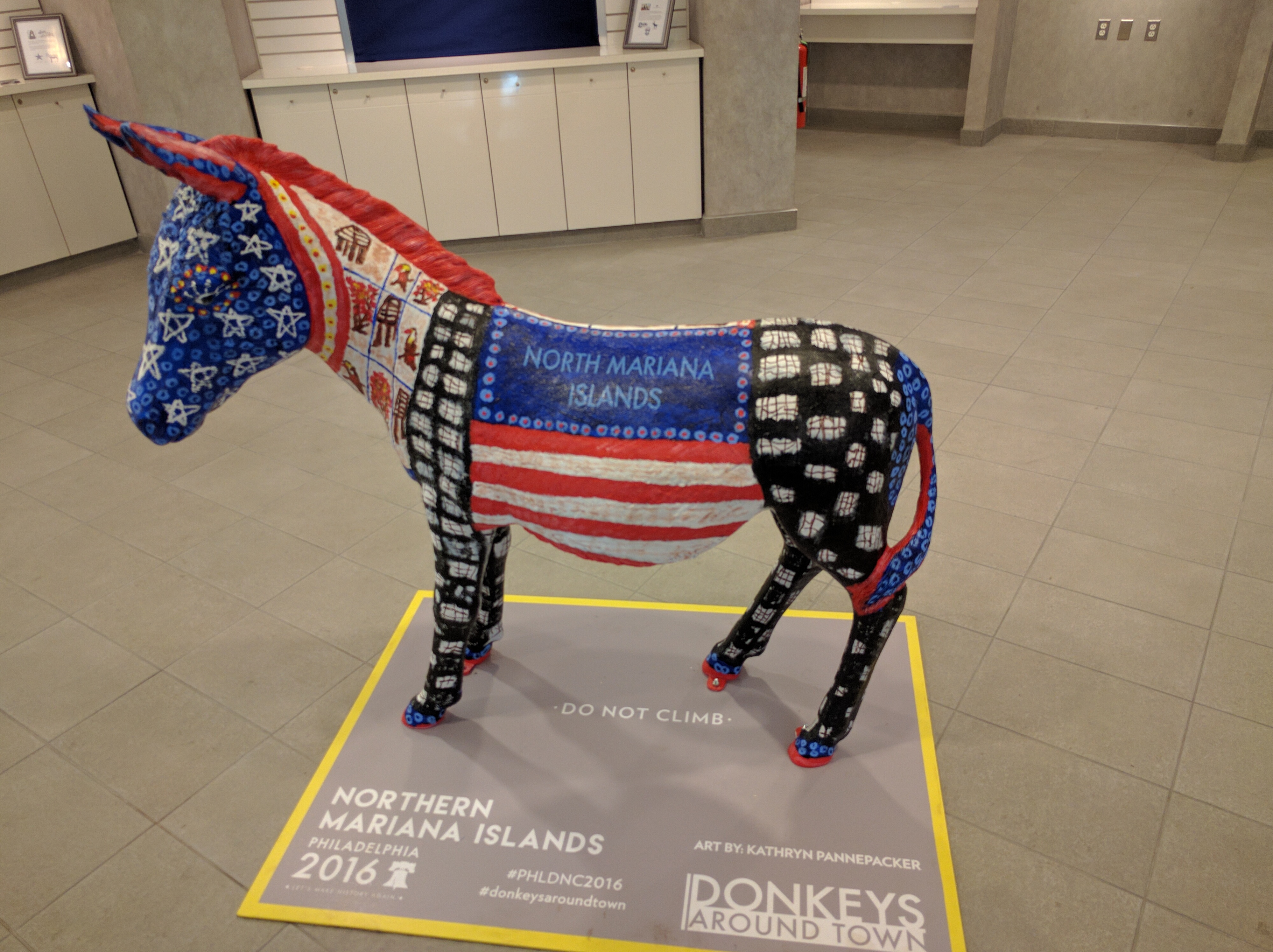 The DNC host committee set up 57 fiberglass "Donkeys Around Town" throughout Philadelphia. The donkeys, painted by local artists, represent members of the Democratic delegation coming to the city for the convention. 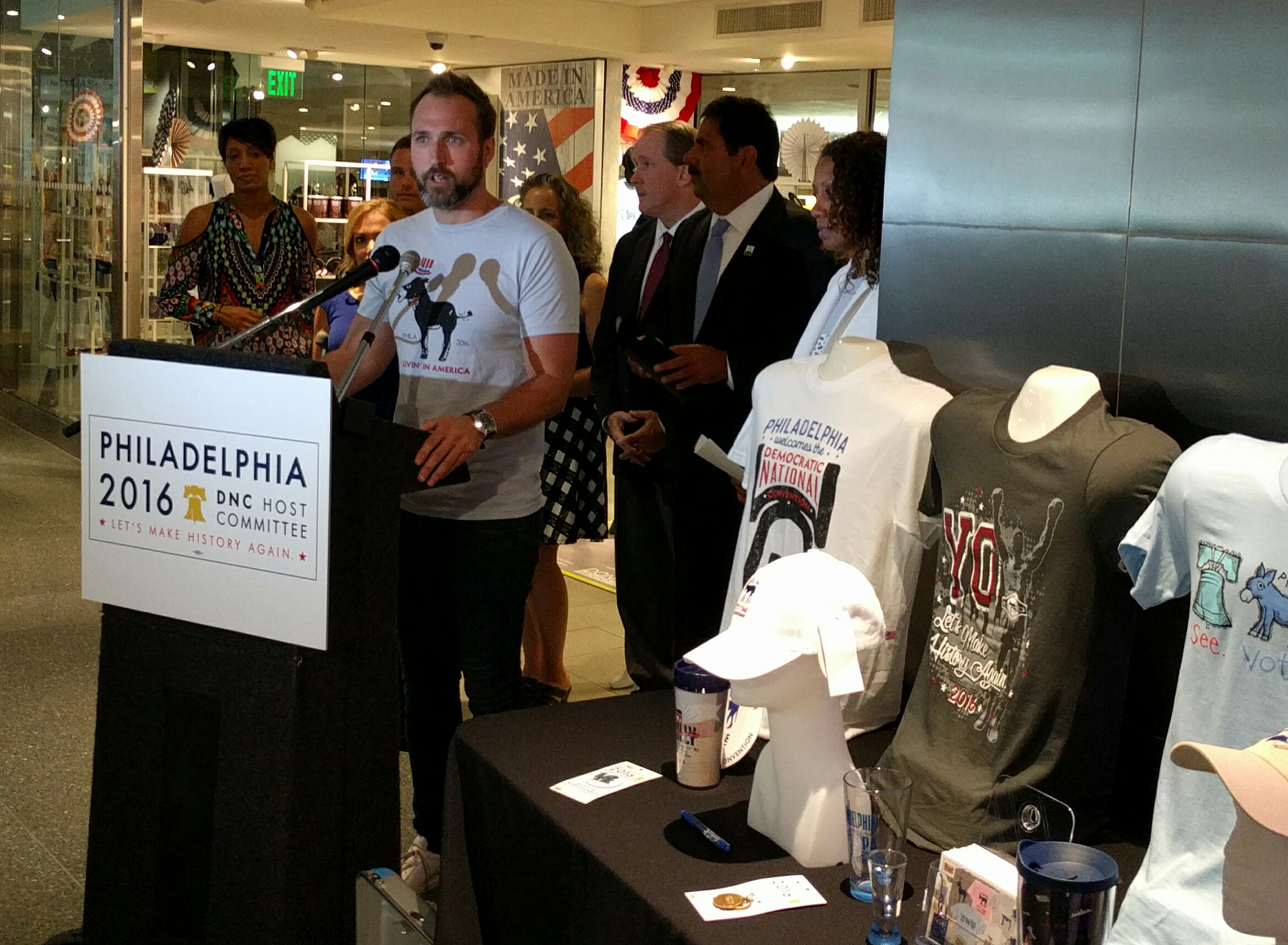 Kevin Washo Jr., executive director of the Philadelphia host committee for the 2016 DNC, announces the opening of its official pop-up shop in the Comcast Center. 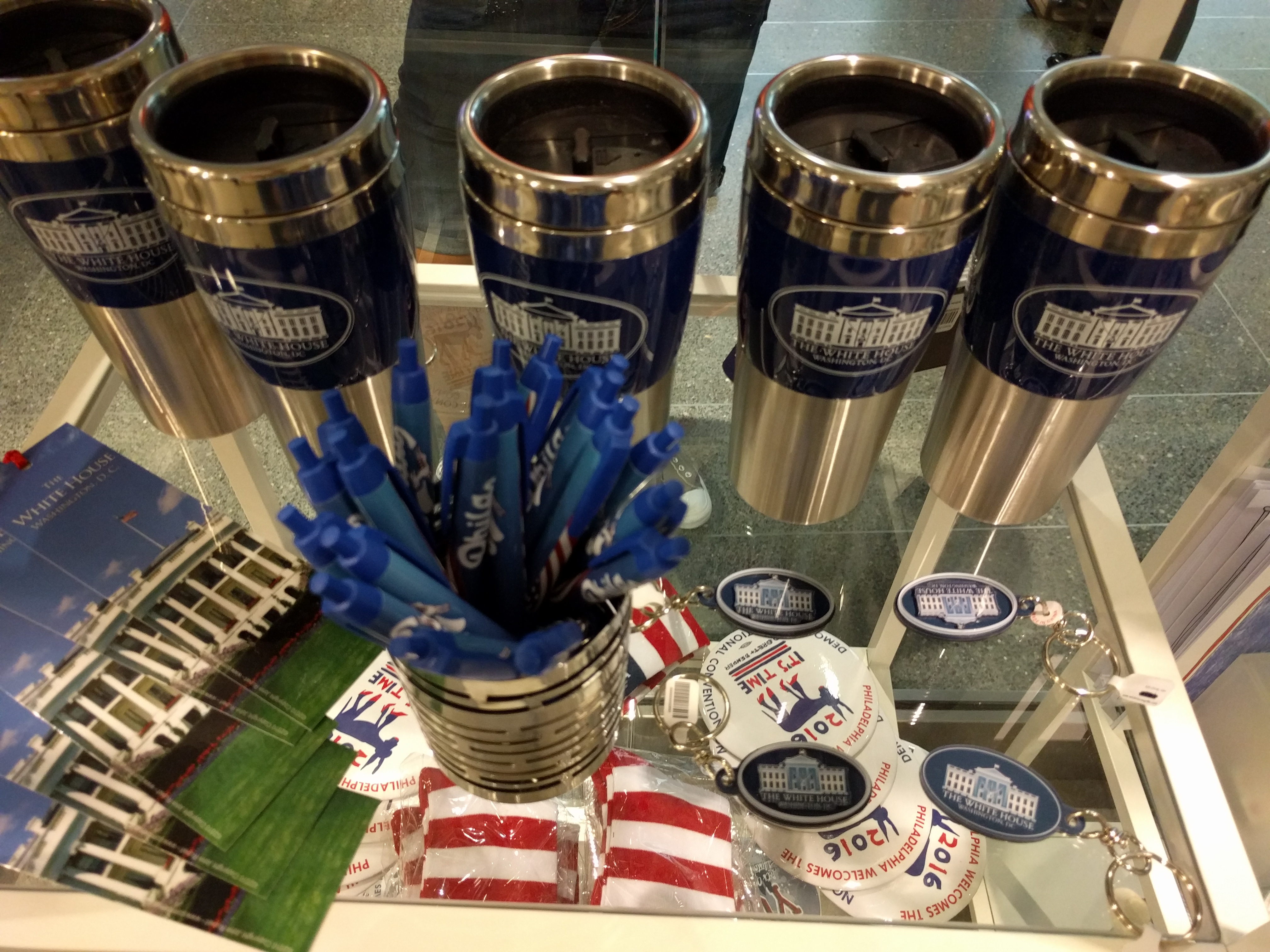 The pop-up shop was stocked with tumblers, pens and many other patriotic promotional products. 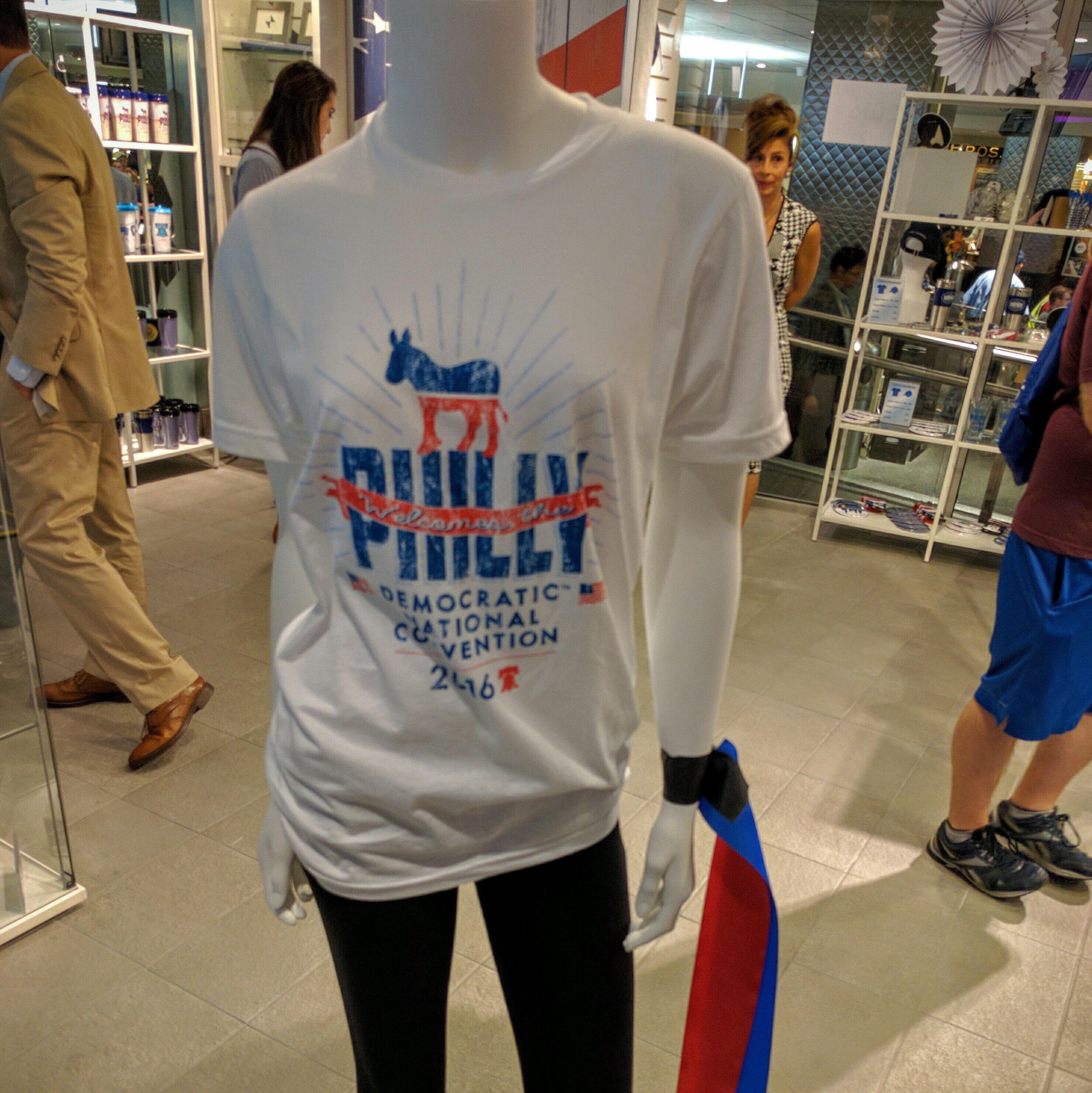 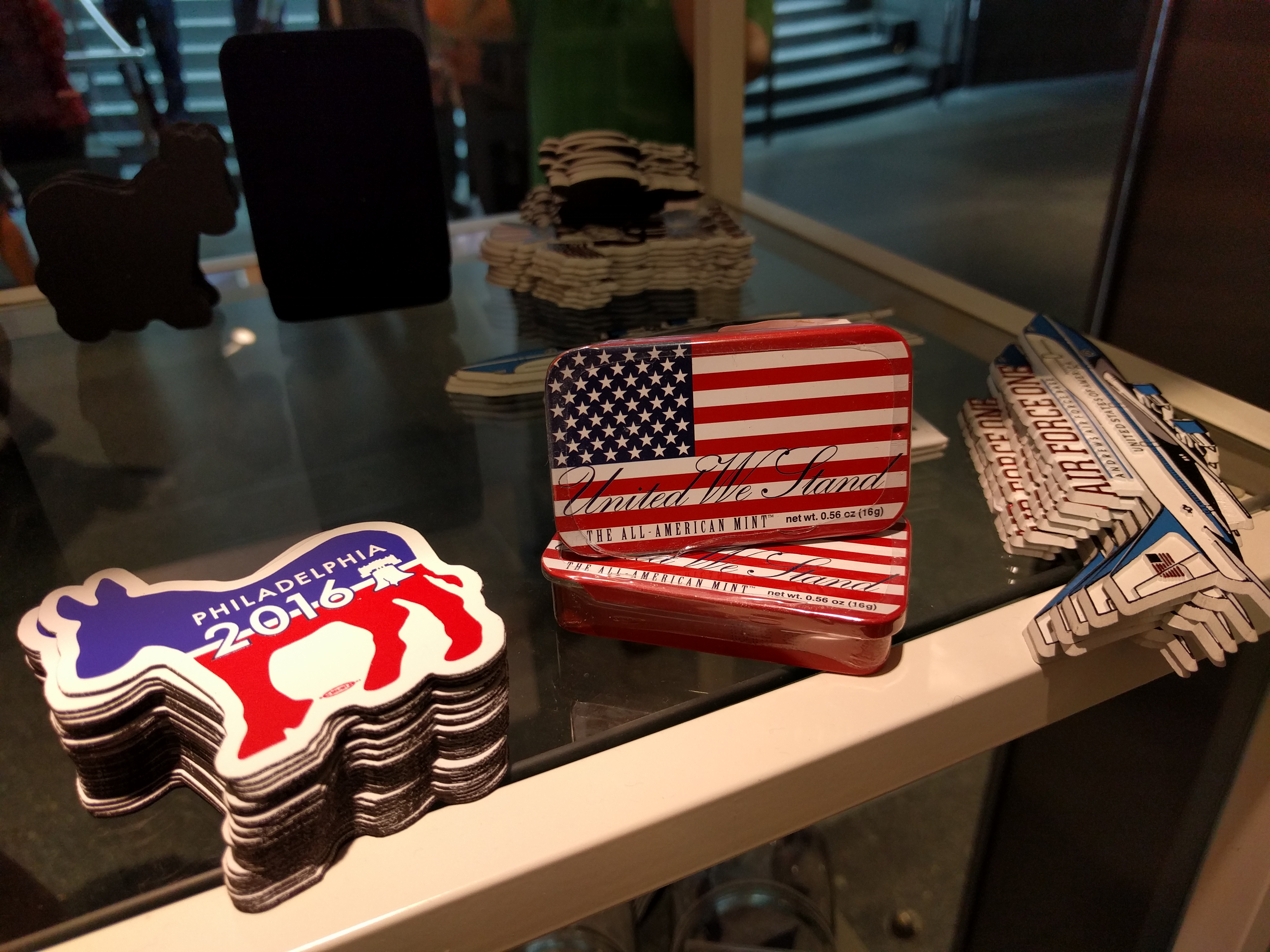 Magnets and mints were among the many mementos available for purchase.

Better Chia Pet, Hillary Clinton or Donald Trump?
Eco-Friendly Fabric Is Made From Wood Fibers
Digital BobbleHead Of Trump Answers Your Questions Online
Crazy Kentucky Derby Hats Are the Life of the Party
MLB Star Bryce Harper Is Half-Turkey In Wacky “Gobblehead” Promotion
Answer The Call For USA Made Products