The Lawrence, MA-based Top 40 supplier didn’t just survive the single most challenging year in the history of the promotional products industry. It achieved record company sales, provided more philanthropic support than ever to worthy causes and increased U.S. staffing levels by about 30% to 500 people. It also forged five new retail brand partnerships, made a major acquisition, and launched more than 250 new products and related services that were vital to distributor customers, including all-important PPE lines and kitting solutions. 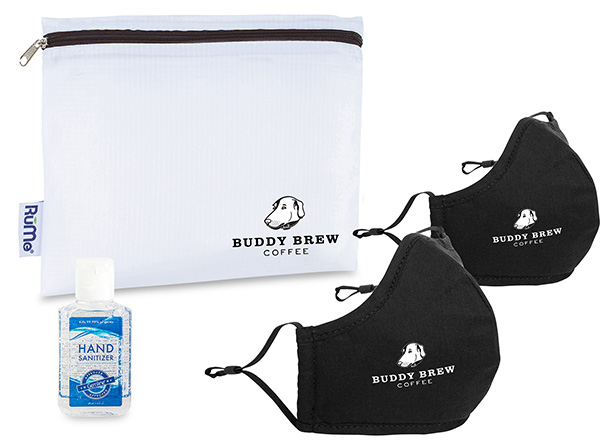 In 2020, Gemline enlisted several new brands and launched new services that were specifically geared to the needs of buyers during the pandemic. That includes kitted packages of traditional promo and PPE products, such as this reusable face mask and hand sanitizer kit (100666-001), that helped fuel a record year in sales for the company.

And according to Gemline executives, the company did all of it without recording a single case of COVID-19 community spread among its workforce at the firm’s facility – an impressive result of science-driven health and safety protocols with a physical overhaul that accounted for the pandemic’s threat.

For this inspiring adaptation and success in the age of COVID, Gemline (asi/56070) is Counselor’s 2021 Supplier of the Year.

“I’m very proud that during an extremely stressful time our team was able to lock arms and collectively accomplish so much, so quickly,” says Gemline Chairman/CEO Jonathan Isaacson, who extended his leadership industry-wide in 2020 by spearheading informative webinars and podcasts that focused on the realities of COVID-19 and its intersection with promo.

“Every department, from those here in the U.S. to our team in Asia,” says Isaacson, a previous winner of Counselor’s International Person of the Year award, “stepped up and contributed to make things happen. It was incredible what they were able to do as a team.”

Meeting the Challenge Head On

It started with two phone calls in March – one from a teaching hospital, the other from a large senior living center. Both reached out to Isaacson, who they knew through his strong presence in the healthcare world, which includes being vice chairman of the board of Lawrence General Hospital. “They were in a hair-on-fire emergency, desperate to secure personal protective equipment at a time when there were major shortages,” says Isaacson. “They wanted to know if we could help.”

The inquiries became the genesis of Gemline’s shift to PPE – what Isaacson says would be the first of “five or six pivots” in 2020.

Within weeks, as many as 70 Gemline team members were engaged in ensuring the successful sourcing and selling of personal protective equipment. It was a massive undertaking that the firm accomplished with aplomb, becoming one of the most trusted sources for PPE in the promo market. Sales confirm that status: Gemline delivered tens of millions of units of PPE last year, everything from a variety of face masks, gloves and gowns, to face shields, boot covers, sanitizer and more. Distributor votes confirm it too, as evidenced by Gemline winning the new PPE Face Coverings category in this year’s Counselor Distributor Choice Awards. (The company also won in the Coolers category, where it tied with Leed’s for first place.)

In keeping with the company’s stated commitment to product safety and ethical sourcing, Gemline only sourced PPE from factories that it had first vetted. The supplier was able to significantly streamline the evaluation of production centers and inspection of product through its technical facility in Asia (where it has product testing labs and directly employs associates), as well as through the efforts of its deft compliance team.

The thorough, upfront evaluation gave distributor customers peace of mind that they were selling quality products in the Wild West PPE market, where at the time many substandard and even dangerous items were being floated for sale.

“In a chaotic market, consistency and reliability is king, and no other supplier did more to earn our confidence and trust than Gemline,” says Marc Simon, CEO of Sterling, IL-based HALO Branded Solutions (asi/356000), the second largest distributor by revenue in the promo industry. “Gemline’s commitment to compliance, quality and reliability drives our sales teams to work with them whenever possible.” 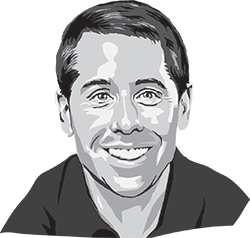 “I’m very proud that during an extremely stressful time our team was able to lock arms and collectively accomplish so much, so quickly.”Jonathan Isaacson, Gemline

PPE played a pivotal role in powering Gemline to double-digit annual sales growth in 2020, but it was far from the only factor in the firm’s revenue rise. Legacy categories, including drinkware, food and Moleskine brand products, accelerated as the year went on. Also essential to fueling sales: Gemline’s adept launch of a service that focused on providing kitted packages of products, both traditional promo and PPE, that could be sent to end-clients’ work-from-home employees.

“Many Gemline products enabled our customers to reach and tangibly appreciate people in their home offices,” says Gene Geiger, chairman of Lewiston, ME-based Top 40 distributor Geiger (asi/202900). In fact, over the holidays the distributor used one of Gemline’s gourmet food towers to thank its employees working from home and scattered across the globe.

As some competitors hunkered down amid the trials of 2020, Gemline expanded its reach, building partnerships with retail brands that were relevant given COVID-19 concerns. Those brands each latched onto popular pandemic trends: Osprey (hiking and outdoor activities), Modern Sprout (gardening), American Red Cross (safety), and both Soapbox and Beekman 1802 (health and hygiene).

Then, earlier this January, Gemline announced it would be providing Paper Mate and Sharpie writing instruments to promo through a partnership with Newell Custom Writing Instruments (asi/84833). That deal came shortly after Gemline’s mid-December acquisition of RuMe, short for ReUseMe, a designer of reusable bags and accessories whose products Gemline sells.

The moves earned praise from customers and promo industry leaders, including Ira Neaman, president of Avenel, NJ-based Top 40 supplier Vantage Apparel (asi/93390), who like Isaacson and Simon is a member of Counselor’s Power 50.

“Gemline is very progressive in anticipating the various markets and its customers’ needs,” Neaman says. “Whether it’s food products, soaps, journals or drinkware, or its core bags and padfolios, Gemline is both thoughtful and smart about providing just what clients want.”

For Isaacson, President Frank Carpenito and other Gemline leaders, the firm’s odds-defying success in 2020 is especially satisfying because it came without compromising core company values, which are anchored in integrity, operating ethically and supporting community and the promo industry.

For instance, when it came to Gemline personnel in the COVID era, the top three priorities were, in Isaacson’s words, “safety, safety and safety.” To that end, Gemline assembled a Standards of Care Advisory Committee that included experts in the fields of epidemiology, environmental health and environmental engineering. Part of the committee’s task was to advise Gemline on how to keep employees who couldn’t work from home, such as production workers, safe while they were in-facility.

Acting on the insights from experts, Gemline reengineered its facility and implemented extensive safety protocols. The firm set up self-contained pods where workers could eat lunch. It erected barriers to make the work floor safer. Certain doors were removed to allow for better ventilation and social distancing signage abounded. The firm set up a rigorous contact tracing program, and employees were obligated to wear Gemline masks, which executives knew were effective thanks to the in-house product testing that had been conducted. Employees were educated on best practices for staying safe. Isaacson and other leaders routinely walked the facility to identify potential vulnerabilities and areas where safety improvements could be made.

“Our entire organization rallied around each other without exception, and tirelessly dedicated themselves to servicing our customers and strengthening our company during a very difficult time in our industry,” says Carpenito. “This included many people working six-day weeks for 23 of the last 26 weeks of 2020 to meet record-level demand.”

Gemline took care of its community and supported good causes as well. In fact, the company increased its philanthropic donations in 2020 by five or six times its normal amount. 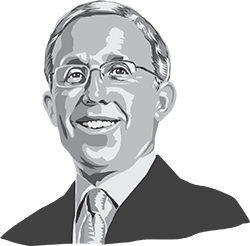 “In a chaotic market, consistency and reliability is king, and no other supplier did more to earn our confidence and trust than Gemline.”Marc Simon, HALO Branded Solutions

Gemline provided support to organizations that included the Lawrence General Hospital, the local Boys & Girls Club and the Greater Lawrence Family Health Center. The firm also supported scholarships that help hard-working but in-need locals obtain free community college education, and powered a scholarship at the University of Michigan, Isaacson’s alma mater, that assists children raised in foster care in getting a four-year degree.

“We’ve been engaged in philanthropic activity for some time, but only recently started to talk about it publicly,” Isaacson explains. That’s because “we don’t do these things to call attention to ourselves; we do them because we firmly believe they’re the right thing to do.”

The altruistic ethos also motivated Isaacson to take a more pronounced thought leadership position in promo from the earliest days of the pandemic and throughout 2020. Leveraging his connections in the medical world, he delivered important, fact-based insights on COVID – at times when much misinformation circulated – through various webinars, podcasts and more.

Gemline’s commitment to community and promo is continuing. In early January, the supplier hosted a free webinar in which a former dean of the Harvard School of Public Health, Barry Bloom, discussed what promises COVID-19 vaccines offer. Isaacson, meanwhile, is chairing a pandemic-battling task force in Lawrence.

The list of activities and accomplishments could go on. What they amount to is that, in 2020, Gemline navigated the pandemic far better than most, while being true to – and even enhancing – its most important principles and practices on business ethics, operations and philanthropy. That figures to continue in 2021, where the company is planning to launch more innovative products and services, and expand its roster of retail brands. Sustainability will be a sharp focus too, with Gemline investing in initiatives that will positively impact product, packaging and operations. The supplier will also key in on diversity and inclusion efforts, as well as investing in the development of its people; doing both is fundamental to Gemline’s success, says Isaacson. Additionally, it will be debuting new services that are a direct outgrowth of the company’s recent heavy investment in digital infrastructure.

“Economic crises put every business to the test,” says Geiger. “A small number emerge from the smoking carnage having surged ahead, and Gemline is one of them. Its strong performance over the difficult year past suggests that it will be an increasingly important resource for us going forward.” Many in promo are saying the same.