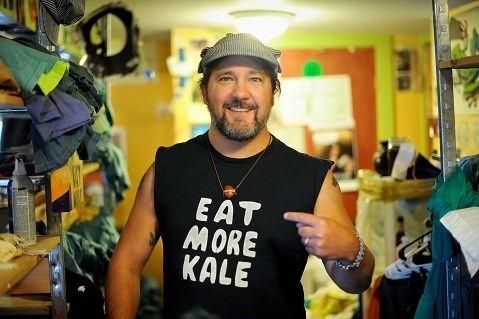 Eat more kale. This simple, three-word commandment had humble beginnings, but eventually became a rallying cry for Vermont, as one tiny screen printer took on fast food Goliath Chick-fil-A in an epic trademark battle that waged for three years.

Back in the early aughts, Bo Muller Moore had made a name for himself as the “funny T-shirt guy,” making and selling hand-stenciled, screen-printed apparel. Looking to unload a bumper crop, a local farmer asked Moore to create a handful of shirts bearing the message “Eat more kale,” as a way to promote the leafy green at the weekly farmers market. “I thought that would be the end of the story,” Moore says. But the catchphrase proved popular, and with the farmer’s blessing, Moore started printing and selling kale shirts to the general public. “Every year, I sold more than I did the year before,” according to Moore.

A friend later convinced Moore to purchase the web domain, www.eatmorekale.com, and set up an e-commerce site. “The very first day, I sold a shirt in Boston, one in Austin and one in Berkeley,” Moore recalls. The beginner’s luck seemed like a good omen. As the online business grew, Moore decided to actively promote it, by ordering some round, green bumper stickers with his website name printed in white. “I started buying up to 15,000 stickers a year and giving them away as freely as I could,” Moore says. He would “cold call” co-ops and other health-conscious venues by mailing a simple “hello” note along with 15 bumper stickers. The tactic paid off: “For a guy with no technical skills and a history degree, it was leading to something very fun and tangible and real.”

In 2011, after seeing more and more imitator sites cropping up online, Moore decided to protect his brand and trademark “Eat more kale.” He hit a major roadblock, however, when Chick-fil-A sent him a cease-and-desist letter, ordering him to shutter his virtual store and send his inventory to its Atlanta headquarters to be destroyed. The fast food chain claimed Moore’s proposed trademark was too similar to its own “Eat Mor Chikin” slogan, a poorly spelled plea from cows afraid of becoming hamburgers. The letter included a list of 40 other businesses using “Eat more” phraseology that Chick-fil-A had silenced. “If I was a restaurant or sold something you can eat, or if I spelled it ‘Eat mor kal,’ I would understand,” Moore said. Instead, he adds, the Chick-fil-A letter seemed more like “corporate bullying and trademark abuse.” He decided to fight back – posting the cease-and-desist letter on social media. “I’m so glad I did,” Moore says. “My world changed. It went viral.”

Moore’s Facebook page gained more than 15,000 followers, and about 42,000 people signed an online petition in support. Everyone from the creators of Ben & Jerry’s ice cream to the governor of Vermont rallied behind Moore. The governor started a fund that raised $25,000 to help Moore with legal fees. Strangers would send money and words of encouragement. Without all the help, “I could have afforded maybe three hours of a lawyer’s time,” Moore admits. A film maker raised $100,000 on Kickstarter to document Moore’s legal battle. “A Defiant Dude” is currently in production, but a trailer is available on YouTube. Moore also sold about $1 million in T-shirts over the three-year trademark fight. “I made lemonade out of the lemons that Chick-fil-A gave me,” he says.

Finally, in 2014, Moore prevailed, when the U.S. Patent and Trademark Office approved his trademark application. In a press conference at the time, Vermont Governor Peter Shumlin called it a “victory for grow local” and “a victory for Vermont.” In response to Moore’s trademark victory, a Chick-fil-A spokeswoman told news outlets that “Cows love kale, too.” Moore, for his part, is just happy the positive publicity and successful trademark registration have allowed him to focus on his screen-printing business, full time: “I’m not getting rich, but I love what I do, and I want to keep doing it.”

For more stories about trademark and copyright battles waged by apparel decorators and distributors, look for the April cover story of Wearables magazine.