EOs of Fortune 500 companies know that the biggest rewards require no small measure of up-front risk. Take Amazon. The internet retail behemoth has had more than its fair share of failures over the years. The Fire Phone, for example, cost the company hundreds of millions of dollars when it flopped, but CEO Jeff Bezos isn’t fazed by any of Amazon’s missteps. In a report to shareholders, he once stated that bold ideas will fail nine out of 10 times, but the slim prospect of blockbuster success should always outweigh those long odds: “Given a 10% chance of a 100 times payoff, you should take that bet every time,” according to Bezos. 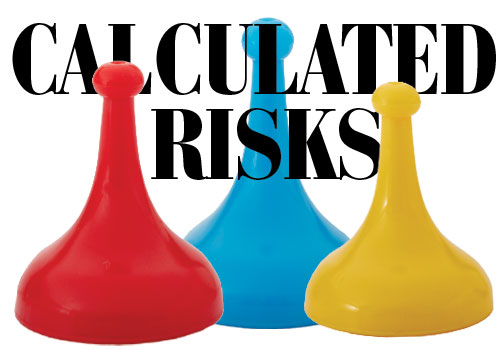 For the risk averse, that daring declaration is enough to bring on a case of the cold sweats. But there’s a kernel of truth there that even the most cautious of apparel decorators should take to heart. Growth stems from risk, but it has to be the right kind of risk. Running a disorganized shop, letting orders slip through the cracks, having no protection against cyberattacks, or being unprepared for potential disasters – these aren’t the scenarios that launch your business to the next level. Instead, distributors and decorators should mitigate such risks by implementing good processes and plans, carrying the proper insurance and playing the “what if?” game whenever possible.

nce your house is in order, you can turn your focus to the kinds of risks that are likely to bring rewards: buying new equipment, expanding your shop or branching out into new niche markets or decoration techniques. First, however, you have to do your due diligence and run the numbers, says Craig Wolfe, owner of Celebriducks (asi/44398). Shahara Wright, an attorney and business strategist, recommends sitting down with a trusted team of employees or even outside advisers to help create a vision plan for your business. “You should never do it by yourself,” she says. “You need people to bounce things off of.”

With your team, you can map out a few high-level goals you’d like to achieve, and then work backward to figure out a roadmap for how to get there. Once you have a strategic plan in place, it’s much easier to evaluate opportunities, Wright says. “You can decide whether a risk makes sense,” she adds. “You never really know what’s going to happen, but you want to be able to make the best decision. I personally look at it as if everything goes well, what happens? And if everything goes terribly wrong, what happens? If I can still have a business at the end of the day, it may be worth the risk.”

Of course, even what looks like a sure thing is still, to some extent, a roll of the dice. With that in mind, we created a board game-like journey through the perils of owning a small business, highlighting some of the typical dilemmas you’ll face, the types of questions every entrepreneur should be asking, and some important statistics on the path toward business growth. 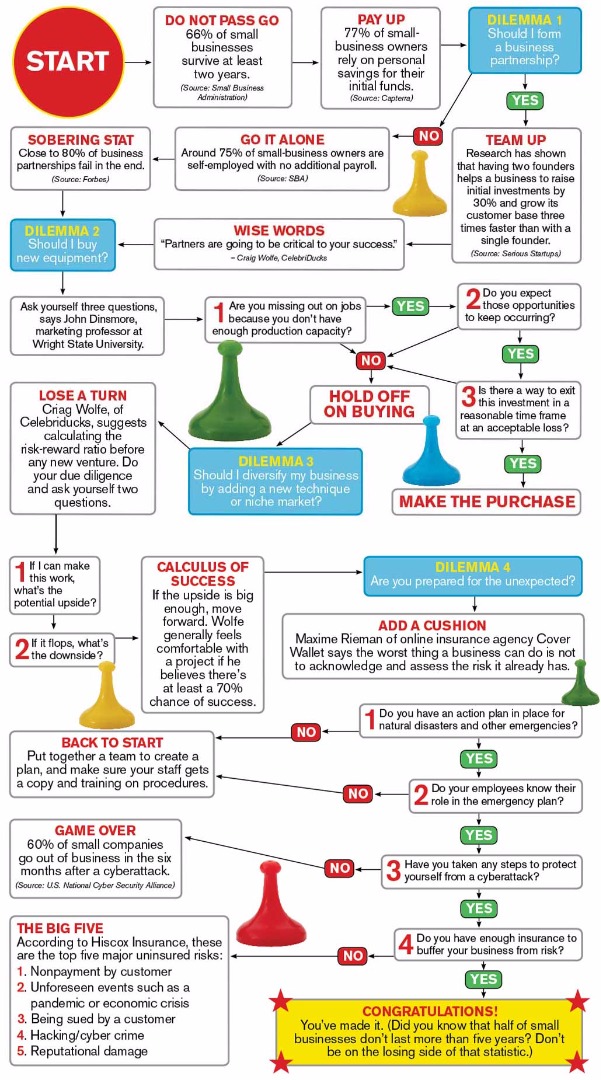 Owning a small business is a risky venture. There’s always a chance of failure. But smart entrepreneurs have learned to push the odds of success in their favor. Check out these case studies to learn how low-, medium- and high-risk endeavors panned out for these business owners. 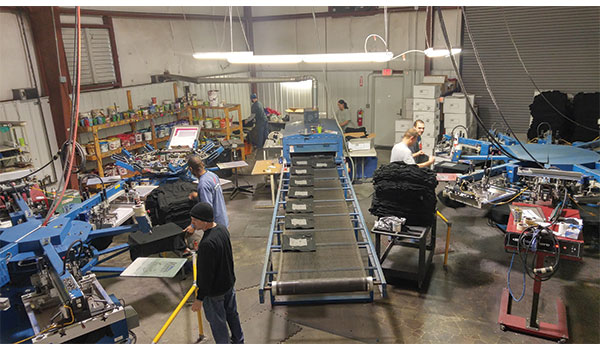 any decorators wait until they’re straining at the seams before adding a new machine to the mix, but Michael Richards of One Stop Promotions in Birmingham, AL, decided to pull the trigger on a $60,000 purchase before the shop had the customer base to necessitate it. “We really didn’t have any more business, but I wanted to be able to work more efficiently,” he says. “I wanted to be ready to expand. It was probably the best investment we’ve ever made as a company.”

Richards took out a bank loan to purchase a new six-color automatic screen-printing press and improve his conveyor dryer. “My wife wasn’t too happy about it,” he admits. However, adding a six-color press to the 10-color automatic and six-color manual already on the shop floor has given One Stop Promotions more flexibility and increased its overall efficiency. Now, for example, the eight-employee shop can complete a 6,000-piece order in one eight-hour day. Before, it would take them closer to two and a half days. “We pick up orders that we normally wouldn’t have,” he says.

Thanks to diligent record-keeping and a strict repayment plan, One Stop Promotions was able to pay off the loan in just 13 months, Richards says.

Richards’ advice: “If you don’t take risks in your business, you’re going to regret it down the line.” 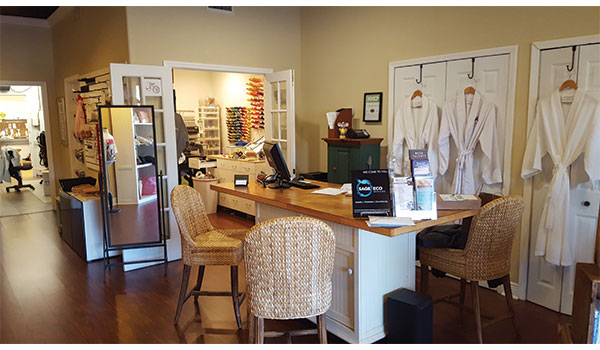 hree years ago, Zachary Davy was burned out from his career in the hospitality business and looking for his next move. His stepmother gave him a job at her Sarasota, FL, embroidery shop, Say It With Stitches, and he jumped in with both feet. He liked the new business so much that he bought it from her. “I knew nothing about embroidery,” Davy says. “It turns out I’m good at it, and I really like it.”

Davy gave himself a crash course in embroidery by joining the National Network of Embroidery Professionals (NNEP), reading all the relevant industry magazines and going to trade shows. It also helped that he has a knack for computers and mechanics.

Now that he has a handle on embroidery, Davy has turned his focus to marketing, joining Business Network International (BNI) to meet other small-business people. “In the first three months of membership, I paid off my dues, and the business has just continued to grow every day,” Davy says. In fact, he recently hired a part-timer to come in and help run his two single-head embroidery machines, and added a heat press to the shop to diversify his decoration options. 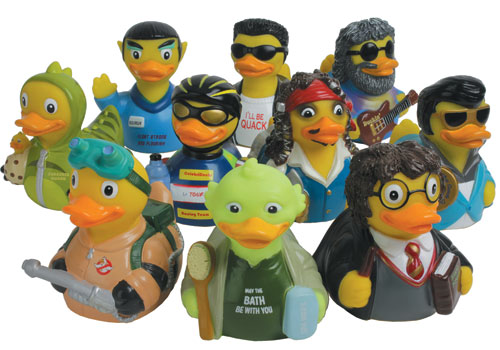 raig Wolfe, president of Celebriducks (asi/44398), had a crazy idea: Why not return the rubber-duck business to its American roots? The manufacturer was already making the novelty item in overseas factories, but a few years ago, he decided to launch a line of high-end ducks in the U.S. It was an admittedly huge risk, but Wolfe was confident he could pull it off. “I felt it was the right thing to do,” he says. Though, “If I knew how much resistance I was going to get, I don’t know if I would have done it.”

He set up shop in Ohio at a factory that used to make rubber ducks in the past. But he quickly discovered the institutional knowledge had disappeared and he had to relocate operations to New York, to a “factory that really did have deep background on how to do it.”

Through perseverance and due diligence, Wolfe was able to transform his “biggest failure” into his “biggest success.” Celebriducks has sold millions of its licensed rubber ducks, which have been featured on TV shows and in magazines and newspapers. The company also creates custom toys for the likes of Harley-Davidson, the Future Farmers of America and more.

It’s all about taking calculated risks, Wolfe says. “No matter how much work you do, you’re never going to really know until you get into production,” he says. “Taking a risk is all about knowing your capabilities and what your factory can and can’t do. … If you can own your niche and bulletproof it, you’re always going to make money and be financially secure.” Wolfe says he’s comfortable taking a risk if he’s 70% sure it will pan out. So far, so good, he adds.