Since launching his company, Promoworks LLC, five years ago in the Philadelphia suburb of Bensalem, PA, Chris Riegg has spent a lot of time building his business by cold calling potential customers in different industries. The result has been a significant presence in the sports market, as well as with local senior care facilities. 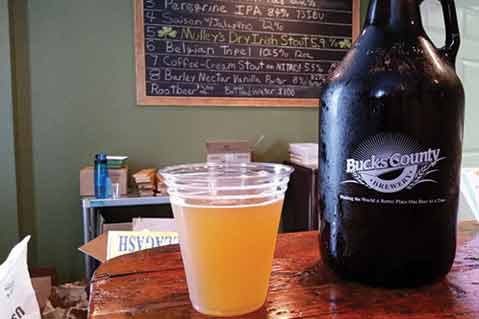 Yet Riegg has also landed business in one of Philadelphia’s biggest emerging markets: craft beer. More than two dozen craft breweries call the region home, and more are opening regularly.

At first, Riegg was not targeting the market as a business opportunity. Instead, he was enjoying it with friends, and recognized that he could be the one to fulfill the need for promotional products. Showing up at a brewery and simply asking about it is a good way to meet the owner, Riegg says. “The way my mind is, I’m always working,” Riegg says. “I’d hear about a new one popping up, and I’d want to go check it out.”

Specially marked tumblers and growlers (like the one above he created for Bucks County Brewery) are in demand, Riegg says. New breweries tend not to have liquor licenses when they first open, and therefore are limited as to what they can provide customers.

“They’re not allowed to sell pints,” Riegg says. “The only way they can really sell their beer is in those takeout growlers, which is a big source of revenue for them. I put their logo on them, they sell them and they’re out the door. They need another pallet a few weeks later. Since they couldn’t sell pints, I’d put a four-ounce fill line on the pint glasses so they could do samples. People can try a beer but they can’t collect money for it, and they can’t do more than four ounces.”

Before he knew it, established brewery customers were talking with other startups, and business began to grow. Promoworks now provides a steady supply of growlers and tumblers to several breweries and brew pubs. “New people started up, and I got referred,” he says. “It’s a nice repeat business.”