Following a COVID-induced coma, merger and acquisition activity has reawakened and is on the rise in the North American promotional products industry. The transactions will drive consolidation within the space, executives say.

The evidence for the return of M&A is compelling.

Facilisgroup, a Brentwood, MO-based partnering community and software-as-a-service company for promo firms, reports that M&A transactions involving Facilis partners have increased more than 200% in 2021 compared to 2019, a year that saw ample acquisition deals across the industry.

Certified Marketing Consultants (CMC), an Indiana-headquartered firm that provides consulting specifically to promo companies, says that the number of business valuations it has provided for clients has doubled of late. That’s likely happened because distributor owners are seeking to understand the value of their companies as they consider a potential sale.

“We think this is a leading indicator of interest in owners wanting to sell their companies,” says Jamie Watson, partner at CMC, which assists promo owners in selling or buying a business, among other services.

The impetus to acquire or be acquired appears to be particularly pronounced among distributors.

“There has been a definite increase in distributors interested in exploring a possible sale.” Marc Simon, HALO

“There has been a definite increase in distributors interested in exploring a possible sale of their business these last several months,” says Marc Simon, a member of Counselor’s Power 50 list of promo’s most influential people and CEO of HALO Branded Solutions (asi/356000), the industry’s largest distributorship by revenue.

The Sterling, IL-headquartered company has pursued one of the most aggressive and successful acquisition strategies in the industry in recent years, buying a host of companies that include other Top 40 firms. In its latest deal, HALO acquired New York City-based Captiv8 Promotions in September. “A growing number of business owners have reached out to us,” Simon shares.

Hover over chart for larger view

The phenomenon isn’t just playing out in the promotional products industry. According to Refinitiv Deals Intelligence, global M&A activity in 2021 has already set a full-year record … in just nine months. While technology has been the greatest source of activity globally, the rush of spending applies to all industries – and most certainly promo.

“We’re seeing a definite uptick in inbound inquiries from distributors interested in selling their businesses, and target acquisitions have been more receptive,” says Jo Gilley, a Power 50 member and CEO of Illinois-based Top 40 distributor Overture Promotions (asi/288473), which is making strategic acquisitions a priority under new ownership that was formally installed early in 2021.

Grossman Marketing Group (asi/215205), a distributor that does tens of millions in revenue annually, has completed eight acquisitions in the last eight years. Its most recent came in September when the Massachusetts-headquartered firm acquired New Hampshire-based Symbol Marketing & Promotions.

More such deals are in the cards. “In recent months, more distributors have been considering selling their businesses,” says company co-President Ben Grossman. “I expect M&A to continue to increase.”

What’s Driving the Desire to Sell?

In the years leading up to the pandemic, M&A was increasing in promo. Then in 2020 COVID-19 shocked the economy and caused precipitous declines in industry sales – realities that ground the acquisition deal-making to a halt.

“Early in the pandemic, activity declined significantly,” Watson explains. “People just didn't know what the impact was going to be. Then, within three to six months, there was a surge of buyers wanting to acquire and consolidate distributors. Some distributor owners were open to deals but were concerned about value, not wanting to sell based upon an ‘artificial’ decline in revenues. Activity has since increased as revenues start to rebound.”

A variety of other factors are driving the upsurge in M&A. An aging distributor base and fatigue related to the pandemic and supply chain challenges are among the interconnected reasons.

“Our industry is not immune to the Great Resignation,” says Watson. “People are exiting their businesses and jobs for various reasons. The one we hear the most from business owners is that they’re nearing retirement age and are ready to move on. People have weathered the storm and are tired and burnt out.”

Another driver of M&A has been readily available, relatively inexpensive cash. “The access to and cost of capital is making it easier for buyers to make investments in acquisitions,” says Ashely McCune, a Power 50 member and president of Facilisgroup.

Jamie Watson, partner at Certified Marketing Consultants (which assists promo companies in selling or buying a business, among other services) explains how buyers and sellers should approach a potential deal.

“Buyers should appreciate that sellers aren’t going to accept fire-sale value based upon a short-term reduction in sales. They need to be sensitive to an owner’s need to realize full value if and when revenues rebound. Buyers also need to beware of coming across as ‘predatory,’ as it pertains to correlating value to a temporary downturn in sales.”

“Sellers need to understand that the possibility of realizing pre-pandemic value for their companies will be dependent on future-contingent earnout payments, assuming revenues rebound to historic levels.”

Perhaps the most fundamental and potentially long-term accelerator of acquisition activity is that it has become significantly more complex and expensive to compete in promo.

Customer demands are increasingly fueling the need for distributors to make bigger investments in everything from internal technology, tech-driven end-client solutions and digital security, to inventory and sustainability/corporate social responsibility initiatives.

The Maine-headquartered firm has executed a spate of acquisitions domestically and in the United Kingdom in recent years, including buying Colorado-based ProCorp Images Inc. (asi/299697) in August.

As an example of increasingly heavy infrastructural loads, Lantz explains that “PCI compliance is a business requirement, as well as adhering to global privacy laws, data security and customer integrations. If a client requires a punch-out integration, they’re going to have contractual demands that systems are secure. The investment in systems, as well as audits, is significant.”

Additionally, Lantz explains, supply chain disruption is requiring distributors to invest more in holding inventory for clients. “Customers want their merch when they need it,” says Lantz. “It takes cash to invest and hold the inventory for clients at a greater proportion than pre-pandemic. This is also driving M&A interest.”

Gilley says the rising costs and mounting demands have expanded the field of smaller distributors looking to be acquired by larger distributors.

“A sale to a larger company can give them the bandwidth and resources to preserve and expand client relationships,” Gilley asserts. “Most owners are good at selling and building customer relationships; selling their distributorship to a larger distributorship can allow them to focus on these strengths while eliminating the operational work of running a business. And the complexity of customer demands is growing, from operational and global complexity, to hyper-custom web solutions. When you’re faced with a need to invest in technology and operations to handle a changing market, a larger partner can be the best and fastest solution.”

Well-capitalized would-be acquirers aren’t simply looking to partner with anyone, though. Executives say a company they’re acquiring has to be a good fit from a cultural perspective and bring something to the table that complements and augments the acquiring distributorship. Carefully studying such elements before inking a deal is important. “We try to do careful due diligence on every deal,” says Simon. “Every deal is different.”

For some acquirers, there are new wrinkles of due diligence to smooth out in the age of COVID.

“Some things are different now,” Gilley shares. “For instance, we’re looking at a company’s 2019 numbers as a ‘normal year,’ with 2020 numbers as a kind of anomaly, whether they were growth numbers or down. While it’s interesting to see how a company weathered 2020, it’s more relevant to a valuation to see how they were performing pre-COVID and how their 2021 is going.”

Another quirk of M&A during the pandemic? “There are fewer in-person meetings involved in the deal-making process,” Gilley relates. “We did our deal with Westbridge Capital [a Canada-based firm which is among the new owners of Overture] via Zoom and email, with only a couple in-person visits from their U.S. representative.”

Overwhelmingly, promo executives believe M&A will continue to increase in 2022 and beyond. A sign of that belief is that this year Facilisgroup launched Facilis Connect, a service dedicated to preparing, assisting and facilitating merger and acquisition opportunities for its more than 185 distributor partners.

“We’ve always assisted our partners in this area on an individual basis, but due to the volume of partners that have requested support, we decided to make this a more formal program,” explains McCune.

Expect the M&A momentum to intensify.

“Given market pressures that will be persistent for at least another year, we would expect M&A activity to increase,” says Gilley.

Simon notes: “Activity will remain strong, even if tax rates change. The other underlying factors driving M&A will not dissipate.” 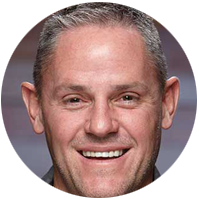 One of those underlying factors includes a belief among industry executives that more private equity money is likely to pour into the market.

Prior to the pandemic, PE-driven acquisitions were proliferating in promo, as the industry makes an attractive target for such investors given its highly fragmented nature, potential for consolidation, and opportunities to capture market share through increased efficiencies.

Not as many PE-related acquisitions have been announced during the pandemic, but there have been notable examples. Those include a January 2021 deal that saw Clayton, Dubilier & Rice, a private equity firm that manages roughly $30 billion worth of investments, become the majority stakeholder in Illinois-based S&S Activewear (asi/84358), the third largest supplier in promo.

“M&A will accelerate because of the low interest rate environment, the continued challenges around supply chains and increased private equity interest in our industry,” says Grossman.

Global private equity-backed M&A activity has gone into hyperdrive this year, with total value doubling through three quarters and the number of deals increasing by 69%. 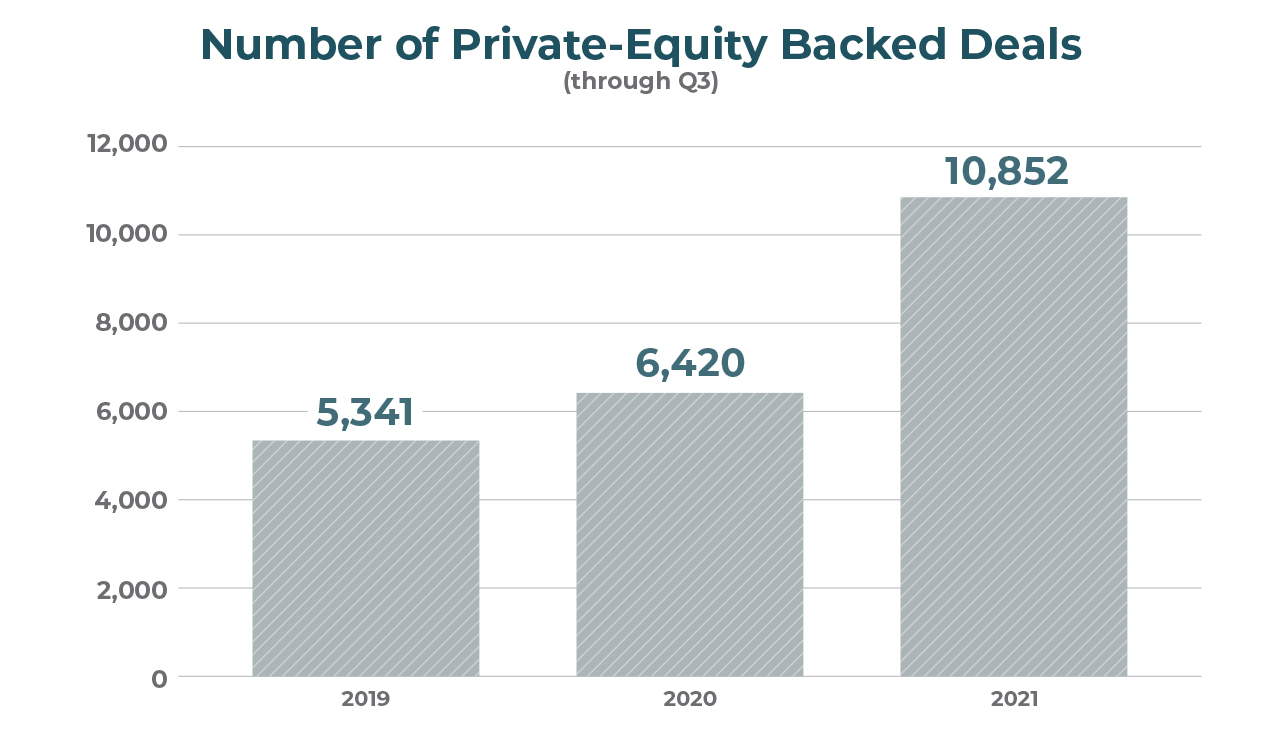 Hover over chart for larger view

PE’s influence on M&A extends beyond new deals. Lance Stier, a Power 50 member and managing partner/CEO of Hicksville, NY-based Top 40 supplier NC Custom (asi/44900), notes that the PE firms that struck deals a few years ago will soon be reaching the end of their holding terms, at which point they could look to sell.

“Generally speaking, a traditional private equity model is for a five-year hold period,” Stier explains. “There have been many private equity investments in the industry, and we expect these assets will trade at some point.”

While interest in M&A and actual transactions are occurring more among distributors, Stier and other supplier executives feel the activity will increase among suppliers too – something already evidenced by the S&S acquisition and other recent examples, such as Florida-headquartered Top 40 supplier Koozie Group (asi/40480) acquiring Hotline Products in February 2021 and former Top 40 supplier IMAGEN Brands (asi/93990) in late 2020.

Similar to the dynamics on the distributor side, factors driving supplier M&A will include mounting technology needs, growing supply chain complexities and challenges, stricter regulatory and corporate compliance requirements, the necessity of investing more capital to keep a business running, private equity interest, and institutional money that remains relatively cheap to come by.

“The stress of doing business, shrinking margins, COVID fatigue, difficultly hiring and retaining talent, supply chain issues – all this will compel more M&A,” says Brandon Mackay, a Power 50 member and president/CEO of West Jordan, UT-based Top 40 supplier SnugZ USA (asi/88060). “Plus, to service clients the way they now require – to give rebates and make concessions at the pace we are – it will take scale. That will push suppliers to consolidate to build a better, stronger company. Consolidation will happen. The pressure is real.”

Get the most important news each day by subscribing to PromoGram.