Fashionable wearables for women have been few and far between, but a handful of startups and high-profile designer collaborations are slowly changing that dynamic.

Wearable technology – like the tech field in general – has a woman problem. Early fitness trackers and smartwatches often emphasized features over fashion, with too-large bands and a masculine, utilitarian design. “They were functional, but they weren’t really designed to be fashion,” says Lyssa Neel, CEO of Linkitz, a wearable tech teaching toy geared to girls. “They looked very clunky on women’s wrists.”

But developers ignore women at their own peril. Women already demonstrate a significant interest in wearable devices, accounting for more than half of fitness tracker purchases and 29% of smartwatch buys, according to a recent study by the NPD Group, a market research firm. Many tech firms have taken notice, collaborating with fashion designers to add a layer of style to existing wearables and developing an array of “smart jewelry” with women’s lifestyles in mind. It’s a step in the right direction, experts say, but there’s still a long way to go before the market catches on to what women really want.

One of the underlying issues is that the function of wearable tech has traditionally been different than the function of fashion, says Alison Lewis, founder of Switch Embassy (switchembassy.com), which creates “intelligent accessories,” like a color-changing, Italian-crafted handbag, and “scrunchable,” customizable light-up T-shirts. “If you come at this from a purely technological field, I think you’re going to get a gadget,” Lewis says. “You always have to put fashion and the human being first. A handbag made in Italy can last 20 years, and the tech inside can be very simple. A gadget, on the other hand, is obsolete very quickly.”

Lewis believes the field should focus more on “creating experiences through technology,” rather than just creating technology alone. Her company’s chameleon purse has been very well-received outside of Silicon Valley, with people loving the fun concept and ability to express themselves by changing the accessory’s color. “When I’m in San Francisco, I’m asked, ‘What does it do? Does it charge my phone?’ No one asks me that anywhere outside of Silicon Valley. The reaction is very different,” she notes. 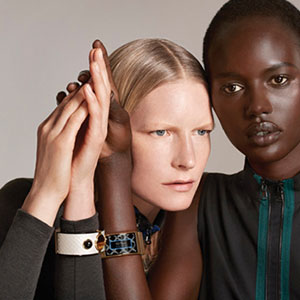 More and more, however, fashion designers and retailers are collaborating with the tech world. Designer Tory Burch created a line of sleek, sexy skins for FitBit, everything from a patterned silicone band retailing for less than $40 to hinged metal bracelets for just under $200. “I think those are quite elegant,” Neel says. “Now they’re not just a sport utility item.” Diane Von Furstenberg worked with Google last year to come up with designer frames for Google Glass. Rebecca Minkoff is developing a notification bracelet that lights up when you receive a phone call or text and a “lightning cable” bracelet that unclasps to become a phone charger. Michael Kors also recently expressed an interest in breaking into the wearable tech space, though his initial announcement didn’t get into specifics. Misfit came out with a Swarovski crystal-encrusted line of its popular Shine activity tracker.

Another indication of the merging of the fashion and tech worlds: CE Week, New York’s largest consumer electronics event, featured a “FashionWare” runway show, displaying trends in high-tech fashion and wearable tech. “Geek can be chic,” says Chris March, the Project Runway alum who emceed the June event. “It’s exciting to see technologists and fashion designer working side by side to create beautiful, stylish, yet functional fabrics and wearable tech accessories for all the fashionistas out there.”

“If you come at this from a purely technological field, I think you’re going to get a gadget. You always have to put fashion and the human being first.

Intel has also jumped on the bandwagon, joining up with retail brand Opening Ceremony to create the MICA (My Intelligent Communication Accessory), an intelligent bracelet made of precious gems and Ayers snakeskin. The accessory, retailing at $495, has a touchscreen sapphire display and vibration-based alerts, allowing the wearer to receive texts, emails and other notifications and send quick, customizable replies. “Intel recognizes that when we decide to wear something, it is a very personal decision and an outward representation of ourselves,” says Ayse Ildeniz, vice president and general manager for business development and strategy for Intel’s new devices group. “Fashion is an important factor in driving acceptance of wearable technologies. … Intel is focused on delivering the vision that for a person to wear technology, it must look and feel good.” Ildeniz adds that collaboration between tech companies like Intel and fashion houses is the best way to drive that initiative.

There’s a tendency when marketing items to women to slap some pink paint and glitter on the exterior, dumb down the functionality and call it a day. Wearable technology hasn’t been immune to this questionable phenomenon, known as “pink it and shrink it.” Some reviewers, for example, have dinged Intel’s MICA for not syncing up to an existing smartphone, instead forcing the wearer to add a new number to receive texts on the device. Others question the necessity for a crystal-studded version of the Misfit Shine. Women are not a monolith, experts say, and many are offended by the notion that the only reason they’re not buying wearables is that the devices aren’t sufficiently sparkly.

The Next Generation of Wearables 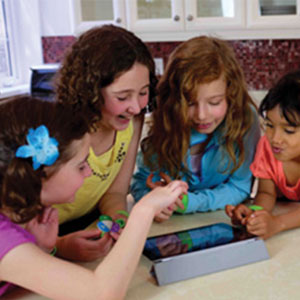 Changing the way we think about women and tech needs to start with the next generation, says Lyssa Neel, a veteran in the tech startup world. Neel, the 10th woman ever to receive a doctorate in computer science from MIT, wanted to pass her love of technology onto her three daughters, but found that the “killer robot aesthetic” of most tech toys isn’t all that appealing to many girls. So, she set out to create another option, landing on Linkitz (www.linkitz.com), a customizable smart bracelet designed to teach young girls to code.

“A lot of technology toys, even though they can be used by boys and girls equally, are targeted just to boys because of their packaging,” Neel says. “Girls often aren’t exposed to technology early on, and studies show that by age 11, girls have already decided tech isn’t for them.”

Linkitz are essentially code-able friendship bracelets, which girls can customize with a pictorial programming language, to light up when friends are near, send secret messages or play games based on proximity or motion. Girls get hands-on building experience, creating different functions depending on how the bracelet is assembled. “It gets girls thinking, if I do this input and that input, what will happen?” Neel says. “It’s an experiential toy that we hope will encourage girls to go into tech.”

I’m not a woman, and I find a little bit of it insulting,” Robert Brunner, founder of San Francisco design studio, Ammunition told the New York Times Bits tech blog. “People seem to think the way you’re going to sell this to a woman is just make it look a little more blingy, and then they’ll buy it. … The trick is making something that people feel good about wearing and has some meaning to them. You only get so far with sprinkling some fashion dust on it. You have to get in and engineer the thing inside and out.”

Neel agrees with his sentiments. “We don’t want less technology or to be pandered to,” she says. “You want it to fit, and do what you want it to do.” There are a number of tech startups run by women, who have a more organic understanding of what will appeal to female consumers, she adds. Everpurse – a handbag with phone-charging technology in the lining – was started by a woman, Liz Salcedo, an on-the-go social worker who wanted an easier way to keep her phone at full power. Christina Mercando is the founder and CEO of Ringly, a smart ring that connects to your iPhone and vibrates when you get a call, text or email.

Kate Unsworth, CEO of Kovert Designs (bekovert.com), created her Altruis lineas a response to her busy life. The tech consultant had an epiphany: She was so “dialed in” to her digital lifestyle that she reached a tipping point in efficiency. “I realized that more doesn’t always equal more productivity,” she says. “I wasn’t able to be present in that moment, and I kind of recognized that I wasn’t really happy.”

“Tech needs to follow the function of design to truly appeal to a wide audience.”

So, she unplugged, stepped back and reevaluated. After some soul searching, Unsworth set some strict technology rules for herself: no phones in the bedroom, no emails in the morning or evenings. But she quickly slipped back into her old habits. Her Altruis smart jewelry, paired with an iPhone app, was her attempt to break free of technological chains. The device can be programmed to vibrate for important emails, texts or phone calls – perhaps notifying you when family or friends call or when co-workers send an email using an emergency keyword. “We kind of say we’re bringing back the pager in a much more sophisticated way,” she says.

Though Unsworth is interested in marketing to men as well in the future, her “digital detox” jewelry is aimed at women right now. Men, she says, typically have their phone in a pocket and can easily set it to vibrate. Women, however, tend to have their phones in their purse or hands. Altruis allows a woman to stow her phone safely, without worrying about missing an important call. Unsworth believes Altruis will allow for more in-person, uninterrupted interactions. “Life is about connecting to other humans,” she says. “My fear is that technology will take us away from that, but we’re an intellectual species. We’ve managed to make tech cater to our intellectual capacity. We can make it cater to our emotional capacity as well.”

Another device marketed to women is the LEAF, from Bellabeat (www.bellabeat.com). With a simple, but elegant leaf shape, the smart jewelry can be worn as a necklace or bracelet or simply clipped to a jacket or sports bra. In addition to tracking activity and sleep patterns, the LEAF monitors stress levels by measuring the rise and fall of one’s breath when it’s worn as a necklace; through its app, the LEAF helps women keep track of their monthly cycles and ovulation. “Women have health issues that men don’t,” says Urska Srsen, cofounder of Bellabeat. “We didn’t want to throw data at a woman saying, ‘10,000 steps to go today,’ when maybe she’s on the second day of her period and doesn’t feel like it. [Instead], we wanted to help women see these patterns that exist in their daily lives and make changes that would help them feel great inside and out.”

Srsen, who has a background in sculpture, believes many wearables have taken an inside out, backwards approach to development. “Tech needs to follow the function of design to truly appeal to a wide audience,” she explains. “In today’s world, we are capable of making products that don’t look like technology, and that’s what we’ve done with the Leaf. Think about the design and how it needs to be wearable and easily integrated into a daily lifestyle – then figure out how to get the technology in there. This is where design and tech meet for true innovation.”