The Emerald City Comicon bills itself as the premier comic book and pop culture convention in the Pacific Northwest, and for the past few years, it’s certainly lived up to its claim. Held each year at the Washington State Convention Center in Seattle, the event welcomes tens of thousands of fans for three days of mingling with celebrity guests, viewing exhibitor booths, participating in gaming tournaments and more. About 80,000 people attended this year’s event.

Representative for Kotis Design LLC (asi/244898), happened to be friends with the convention director. They teamed up and worked together to design a branded hoodie with a custom screen print on the interior of the hood. They chose a marled fleece full-zip hoodie (DT192) from SanMar (asi/84863), which features a full zipper and super-soft cotton/polyester blend. Kotis added a jersey lining to the inside of the hood to accommodate the screen-printed design.

“This all started with the art,” says Karim. “All the icons shown inside the hood were already being used on a bottle offered among the event merchandise, and we told them they would look amazing as a print inside the garment.” The organizers were so thrilled with the results of the proofs that they ordered them for the very next event, during which approximately 450 hoodies were sold.

“We now provide both apparel and hard goods for the Comicon,” says Ashley Holbrook, marketing coordinator at Kotis. “When you’re designing items for themed conventions, you have to truly know your target audience and be creative!” – Sara Lavenduski 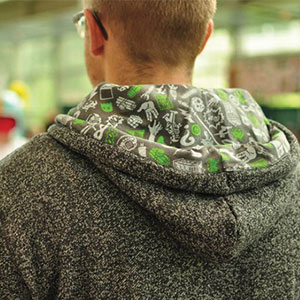