Smartphones have become a hub of personal communication, pelting users with a barrage of beeps and vibrations for tweets, texts, emails, voicemails, social media alerts, app updates and much more. These communications keep users in touch, but prove a distraction too – both for them and others in the vicinity as well.

As user annoyance has mounted over time, startups and smaller tech ventures have taken note. Smart devices such as watches and wristbands are already transferring many smartphone functions to the wrist. And now, device makers are thinking even smaller with the creation of smartrings and other wearable jewelry.

Their goal: create a small, discreet device that’s conceptually simple to use and requires only the use of a finger to provide limited but essential information. Those come in form of texts or call notifications only from individuals the user deems important.

“Our biggest challenge was getting the tech as small as possible. Our goal was to make something you’d want to wear even if the technology was not there.”

A year ago, San Jose, California-based consumer electronics company MOTA successfully crowdfunded a new smartring for that very function. MOTA’s co-founder, Kevin Faro, picks up his phone hundreds of times a day, says company representative Mark McHarry. “There has to be a better way. Market research shows people are annoyed by notifications to no end,” McHarry says.

The MOTA DOI ring provides notifications only about the messages the wearer chooses. It takes messages via Bluetooth from the phone and displays them on a small screen on the ring via a text display of about 30 characters. “The display shows just the right amount of information to make a decision, and do it discreetly,” says McHarry. The ring is designed to be worn with the face on the inside of the hand, facing the palm. “We didn’t want something on a person’s wrist that they [need] two hands to use,” McHarry adds.

The wearer can also turn on a vibration function as notification, and the companion app has a “VIP” function that allows the user to choose the people or apps that push notifications to the ring. Users tap and scroll for messages. The ring is seeing worldwide interest and is available for $200.

McHarry says the smartring could be used for commercial and business notifications as well. MOTA is in talks with an airline that is interested in linking call buttons on passenger seats to smartrings that flight attendants would wear, he says.

While the MOTA product sports a sleek, high-tech look, some smartring companies are attracting customers with the appearance of traditional jewelry. “I loved the idea of creating something that women would get excited about wearing but could also help them feel less chained to their phone,” says Christina Mercando, co-founder and CEO of Ringly. “When I looked at what was already in the market, there were a lot of devices designed to be unisex, but nothing that would fit my personal style.”

The New York-based company hides its technology in a ring that’s set with a choice of precious and semi-precious stones, including onyx, pink sapphire and emerald. Fitting technology in while retaining an attractive appearance wasn’t easy. “I started working with a jewelry designer to prototype different designs,” Mercando says. “Our biggest challenge was getting the tech as small as possible. Our goal was to make something you’d want to wear even if the technology was not there.”

Mercando created Ringly out of frustration; she kept missing important calls and texts because her phone was always buried in her purse. Her friends were experiencing the same problem. Ringly connects to a smartphone with Bluetooth, and the user chooses what types of messages come through and the method of notification, such as a vibration or a flash of color identifying a specific caller. The company started shipping its first smartring orders in early December 2014, and consumers can pre-order one currently for the price of $195.

While communication has been an immediate concern of smartring manufacturers, these device makers are tapping into Bluetooth and Near Field Communication (NFC) for many other potential uses. (NFC is a communications protocol that allows messages to go back and forth between devices at a distance of typically four inches or less.)

Galatea, an international jewelry company, offers a computer-chipped interactive engagement ring that can store images, audio and video celebrating marriage and other special moments in a person’s life. The ring uses NFC to play those images on a smartphone, and needs no battery.

British jeweler Gemporia’s engagement ring uses a Bluetooth chip tucked behind a square-cut diamond to track the ring’s movements. It has been touted as a “fidelity ring” that can keep tabs on a spouse’s whereabouts.

Others are delving into health and wellness. LYCOS (the name behind the popular search engine of yesteryear) has debuted two new devices under the LYCOS Life name: a wristband and a ring. The ring operates as a personal security manager to unlock phones and transfer files, but it also features fitness tracking on a number of fronts: steps taken, calories burned, sleep tracking and heart rate monitoring.

Oura, a startup based in Finland, unveiled a wellness ring in March that purports to go far beyond the existing wearable consumer fitness trackers. CEO Petteri Lahtela says his company wanted to solve a real problem: the need to understand how sleep and daily activity affect health on an individual basis. A ring is an ideal vehicle for monitoring human response 24 hours a day, he says.

Together, the ring and accompanying app function act as a highly accurate miniaturized medical device that measures and evaluates the wearer’s physiological reactions. With infrared sensors, the ring accesses the pulse in the arteries of the finger, while a 3-D accelerometer measures movement and rhythms. Body temperature is also taken. The ring measures sleep in detail, letting the wearer know sleep time, efficiency and length of time spent in each sleep stage.

Galatea, an international jewelry company, offers an engagement ring which can store images, audio and video that can play on a phone with NFC technology.

The ring communicates through Bluetooth with the Oura App in the user’s smartphone, and guides the user with personalized recommendations that improve sleep quality and optimize mental and physical performance. “Oura learns about you and your body reactions in relation to sleep, rest, activity, rhythms of life and your overall behavior. Therefore it forms a long-term view on the changes in your sleep quality and body reactions over time,” Lahtela says.

Unlike other fitness trackers on the market, Lahtela says the ring is more comfortable and can access comprehensive physiological data with high accuracy. “We also had to fit a computer with processing power and enough memory with a big enough battery to provide long operating time,” he adds. The product has been in development for about two years and will be available for $250, with a pre-order campaign in August and deliveries in October.

Smartrings come in various shapes and sizes. While some are smaller and meant to mimic jewelry, others are larger and feature more robust technology to be used as an input device or for other functions.

Ring ZERO from Japanese company Logbar comes in three sizes and weighs anywhere from 4.6-5.4 grams. Made of plastic with a built-in lithium-polymer battery, it uses Wi-Fi and Bluetooth to any number of smart devices. Wearers touch a sensor on the side and then move their finger or draw customized gestures to control devices. Matthew Goldman, CEO of Wallaby, a financial technology company, has used the Ring ZERO to play music or flip through slides of a presentation. “I’ve tried a couple [smartrings] that have sensors and gyroscopes so you can control a presentation in an unobtrusive way,” he says, adding that while functional for those tasks, “most people would want to take it off after the presentation.” 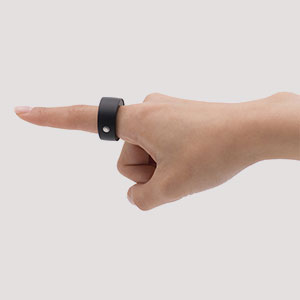 The Ring ZERO from Logbar can interface with devices to switch music tracks, answer phone calls and much more.

Goldman’s software development company makes personal finance apps, and he believes the next generation of wearables would have more value with a secure money feature that could, for example, link to metro passes or financial payments. “Linking financial transactions to wearables is an important intersection, and it’s coming,” he says.

Goldman is working with Pebble, Samsung and Apple on a financial function, and Logbar wants to explore that path as well, he says. “It’s on everyone’s roadmap. I think we’ll see more investment in this and all kinds of wearable applications,” he adds.

Other ring companies are beginning to explore this touchless, effortless interaction. Goldman has an NFC Ring, which as the name implies, used Near Field Technology to communicate small amounts of information. The ring uses one chip for conveying public information and one for private, and it has no battery. It can unlock mobile phones, open NFC-enabled doors, and transfer information such as Wi-Fi passwords, links to websites, photos and contact information. Customized apps can be opened with a swipe. “Clearly, it can be useful, but it can’t be programmed, so it’s not secure for payments,” Goldman says.

It’s clear that while smartrings have promise, further innovations will eventually come to make them a perfect fit.

What will be the most enticing uses of smartrings in the coming years? Michael Reidbord says products with staying power will be able to notify the user without the need to pull out a phone – but only if they offer enough value. “Smartrings alert you in a nonintrusive way,” says Reidbord, a professor at the Fashion Institute of Technology and head of the wearables division for chip company MediaTek. “They blink, vibrate or otherwise indicate communication. There is some value in that.”

But considering the consumer abandonment rate of wearable devices (60% after three months), Reidbord believes smartrings and other wearable devices must do something truly useful with the information they access to have longevity.

Reidbord sees social media as one intriguing possibility. Rings that can inform the user of social media feeds like Twitter, as well as calls, texts and standard notifications, would have more appeal, he says. However, the screen on a ring is so small that the designer faces a challenge to figure out what kind of information would be most effective, since full messages can often not be displayed.

Reidbord sees more promise for a wearable product that monitors biometric information such as the wearer’s heart rate. While fitness tracker bracelets offer many of those functions already (number of steps, monitor sleep and physical activity), they don’t give a full picture of a person’s health because they don’t include sensitive-enough sensors to pick up detailed biometric information. “Once those things are solved, you’ll see greater value added with jewelry,” Reidbord says.

Reidbord considers the yet-uncharted world of earrings a good option for smart fitness jewelry. “The ear can be a direct link to body function. You can sense a lot there,” he says.

Improvements will be made on multiple fronts. “As technology improves for battery life, microprocessors get better, and circuitry gets smaller,” he says, “you’ll see great new innovation. Everyone will come up with ways to improve people’s lives with these devices.” - MW

Manasee Wagh is a contributing writer for Wearables.