For decades, the key word in the International Consumer Electronics Show (CES) has been "electronics." The technology industry's gargantuan show is dominated year after year by items like TVs, computers and, more recently, smartphones and cars. A fashion show it is not, but that notion is rapidly changing. Wearable technology infiltrated the show (which took place January 6-9 in Las Vegas) to a noticeable degree, with hundreds of companies unveiling devices both conceptual and consumer-ready.

Apple was conspicuously absent at the show, disappointing thousands of attendees eager to get their hands on the Apple Watch. (The tech giant is rumored to bring its new tech device to the Mobile World Congress show in the beginning of March.) In its stead were a number of brands unveiling their own smartwatches to capture a share of a market that is predicted to grow 13 times over in the next five years. The glut of products had its share of innovators but also many imitators.

"We're seeing a lot of devices that look similar and perform similar functions," Tom Goodwin, SVP of strategy and innovation at Havas Media, told London's Telegraph, adding "it feels companies are hurriedly jumping into the space quickly to steal a march on Apple."

Fashionable Smartwatches: While the majority of smartwatches at CES were distinctly tech products (with the aesthetics to match), a couple went for a traditional look with technical underpinnings. The Withings Activité Pop takes its Swiss-made hallmarks and infuses it into an affordable ($150) item that's more timepiece than tech piece. It's water-resistant, tracks steps and sleep cycles and requires no charging.

"The goal is to eliminate plastic. We're geeks, but even we don't want to see flashing LEDs and ugly plastic everywhere."
Davide Vigano, Sensoria

Meanwhile, Guess unveiled its new GUESS CONNECT Smartwatch. It features voice controls, hands- and eye-free notifications and connectivity with both iOS and Android phones. But it also sports a sleek monochrome dial that will appeal to both men and women. The watch is a collaboration between the fashion brand and Martian, one of the first to produce smartwatches with voice commands. "[The watch] represents one of the first true marriages of a fashion watch powerhouse and a wireless technology innovator," said Cindy Livingston, president and CEO of Sequel/GUESS Watches.

The idea of traditional watches with tech capabilities will continue to grow, particular as major watch brands like TAG Heuer and Fossil work on their own announced devices this year.

Next-Level Activity Trackers: Bracelets like Fitbit have dominated the activity tracker category, but innovators are quickly shifting those smart capabilities into other products that won't even betray their tech trappings.

The AmpStrip is a flexible silicone band the size of a band aid that weighs just 0.4 ounces. Made by FitLinxx, it attaches to a person's torso and tracks calories, steps, sleep and more. More promising is its ability to gauge a person's heart rate. While athletes take their heart rate monitors off after a workout, the AmpStrip can track a person's recovery and resting heart rate to better suit their training. The band can go a week without charging, and it's waterproof, so it doesn't have to be taken off in the shower.

Sensoria has created a smart sock that monitors the form of runners, since improper strides can lead to knee pain and other injuries. It also tracks number of steps, pace, heart rate and more – all features that will appeal to serious joggers. The machine washable socks come with a lightweight anklet that magnetically folds into the sock and relays data to a smartphone app. "The goal is to eliminate plastic," Davide Vigano, CEO of Sensoria, told the International Business Times. "We're geeks, but even we don't want to see flashing LEDs and ugly plastic everywhere."

And for something that is completely invisible, the DigitSole is getting to the bottom of it with a smart shoe insole. Not only does it track activity, but it can warm someone's feet for hours through its app.

Some of the most intriguing wearable technology from CES: 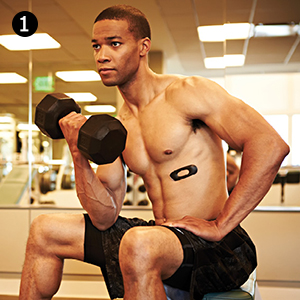 1. The AmpStrip, a fitness tracker the size of a band aid 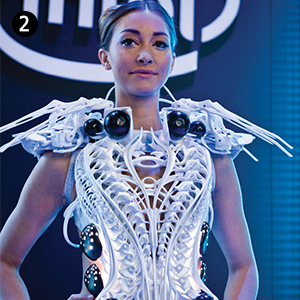 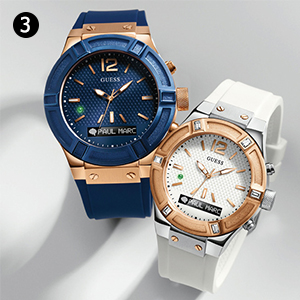 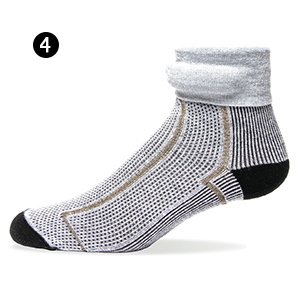 Smart Training: Activity trackers aren't the only devices aiming to smarten up the fitness routine. Sony revealed its Smart-B Trainer headphones, which work like any Bluetooth-enabled headphones. But for the fitness-crazed, it features a built-in GPS as well a companion app that can load music and workouts right into the headphones. The headphones can also measure heart rate; if the wearer is lagging behind in her targeted pace, the headphones can tell her to pick it up and even vary the music to a faster or slower choice.

Man's Best Friend: Humans aren't the only guinea pigs when it comes to the latest innovations. Motorola unveiled the Scout 5000, a high-tech dog collar that includes a camera that streams what Max is seeing. It includes a GPS tracker, a two-way communication system to talk to your pet and functionality similar to a wireless pet fence. The sizable collar works just for larger dogs currently but Motorola should be able to shrink the technology in the future.

Made For a Woman: Wearable tech makers are beginning to make a conscious effort to woo female wearers who have been turned off by the overly techie designs. The Swavorski Shine collection by Misfit, which features jeweled bracelets and pendants, now includes a solar-powered necklace with a richly-hued purple crystal. With no obvious electronic panel, it looks remarkably like a standard piece of jewelry.

Advanced Intel: The microprocessor maker is an essential part of CES, given that its wares practically power the show. After missing out on the smartphone revolution, Intel reaffirmed that it intends to play a major role in the wearable tech boom.

Its keynote press conference included several wearable initiatives, including the reveal of the Intel Curie module, a button-sized prototype designed specifically to power wearables. The company also revealed collaborations with Oakley, Fossil and Opening Cermony, the last of which has created a smart bracelet that will be carried by Barneys New York. The company's goal is to clearly strike a fashionable tone with leading retail brands.

"The rise of new personal computing experiences, intelligent and connected devices, and the wearable revolution are redefining the relationship between consumers and technology," said Brian Krzanich, Intel CEO. "Our goal with Intel technology is to help solve real problems and enable experiences that are truly desired by people and businesses."

Intel's most interesting product is the so-called "Spider Dress." Reminiscent of Doc Ock's mechanical tentacles in Spider-Man 2, the bone-white dress features roboticized spider legs that extend whenever someone unwantedly enters the wearer's personal space. The dress features respiration and bio sensors that monitor the wearer's emotional state; Intel says it can differentiate between a dozen states of behavior. The dress is the brainchild of experimental Dutch designer Anouk Wipprecht. "Fashion and tech are merging at the moment, beyond blinking dresses or cute skirts," she said. "I'm showing how fashion can be thought-provoking, something that pushes people to think and share their feelings."