Data is the lifeblood of wearable technology, and hundreds of consumer devices have delivered it in spades. Millions of consumers have used wearables to track their activity levels and sleep quality. Knowing what to do with that information and acting on it is another matter. As anyone who's tried to carry a New Year's resolution past January knows, that's the tricky part. "An app or a device won't do the hard work for you," notes Kitty Ireland of TechCrunch. "Most wearables don't give much back beyond a bunch of data."

That data, however, can be incredibly significant for doctors and patients. Seeing the inherent potential, many wearable tech developers are creating targeted solutions for the vast health-care market, creating wearables to monitor and treat specific ailments from epilepsy to chronic pain. When it comes to sickness, wearable technology is anything but ailing. "The cost of the technology is dropping, sensors are becoming smaller and cheaper and connectivity technology is allowing all of these devices to speak with one another," says Luis Felipe Rincon, founder and CEO of the tech website Wearables.com. "By definition, wearable technology is worn on or around the body, making it the most powerful technology category to access bio data, which has vast applications for health-care uses."

Many mainstream consumers experience "data fatigue" trying to make sense of the raw numbers reported by fitness bands. But for people managing chronic conditions, tracking data is part of life, whether it's keeping up with medications or monitoring diet and exercise. Integrating a wearable solution takes off some of the burden. "Most people are simply forgetful, not willfully noncompliant," says Jean Anne Booth, CEO of UnaliWear. Her company is Kickstarting a stylish smartwatch, described as the "OnStar for people," which provides medication reminders and discreet support for falls through a speech interface. "Wearable tech's degree of success will directly depend on the tech's implementation of unobtrusively reminding people to be adherent," Booth says. "It must be unobtrusive because nobody wants to be nagged." 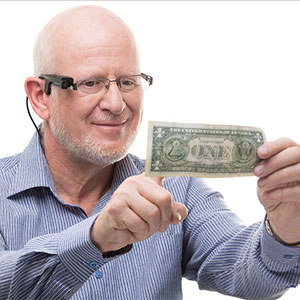 The OrCam is a small camera that clips onto the wearer's glasses and is connected to a pocket-sized portable computer. It can help the visually impaired by using a bone-conduction speaker to read aloud the words or object the user points at. 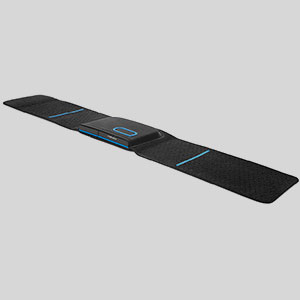 Quell from NeuroMetrix Inc. delivers electrical stimulation through the calf to ease chronic pain. The product is FDA approved.

Another intriguing targeted tracker is the Embrace, being developed by startup Empatica. The smart band monitors the usual biometrics like sleep and physical activity, but it also has sensors to measure electrodermal activity – associated with fear, anxiety and excitement. Electrodermal activity is also strongly associated with seizures, and Empatica is marketing the device to help epileptic patients and their caregivers monitor health. "When people that have epilepsy wear Embrace, they will get an alert when an unusual event happens, like a convulsive seizure," says the company's website. "It will go via their smartphone to parents, roommates or caregivers, so somebody can check on them." According to Empatica, the device is based on research done at MIT and Children's Hospital Boston. Empatica is working on getting Food and Drug Administration approval for the device, which is expected to be ready for shipment sometime this summer.

NeuroMetrix Inc. is focusing on therapeutic relief with its wearable, Quell. The $250 device wraps around a person's calf and uses Transcutaneous Electrical Nerve Stimulation (TENS) to provide relief for the 100 million people who deal with chronic pain. Basically, the band sends small electrical impulses from the calf to the lower brain, which in turn releases the body's natural opiates to relieve pain. "We're looking at the wearable category from a different angle and delivering a very specific result," says Frank McGillin, senior vice president. "It's more than a fad. Other wearables can help coach behavioral changes, but ours actually is helping them get fit and get more active and get more sleep."

Consumers have flocked to the product for two reasons, McGillin says. First, it follows the widespread trend of patients wanting to take a more active role in managing their health; and second, many chronic pain sufferers are dissatisfied with the typical pharmaceutical solutions used to treat their condition. "People love that it's drug-free," McGillin says. "They really are looking for alternative solutions."

FDA-approved Quell is designed to be worn continuously and provides 40 hours of pain relief on one charge. The company offers a 60-day money-back guarantee, since TENS technology, though proven, doesn't work for everyone.

Several tech startups are helping to redefine what it means to be disabled, creating wearable devices to help people with visual and hearing impairments, while avoiding the stigma of traditional solutions like hearing aids. "Performance boundaries are now seen as flexible; the body's weaknesses as negotiable," Will Seymour, brand officer of the Future Foundation, told Forbes.

"We'll see vast adoption of wearables throughout the various stages of health care: preventive, treatment, hospital stays and recovery. The patient-physician relationship will also become more involved and active as doctors gain access to the data."

An Israeli company has received a lot of press for its entry into the world of smart glasses. The OrCam device is a small camera, connected by a thin cable to a pocket-sized portable computer. It clips onto the wearer's glasses via magnet and uses a bone-conduction speaker to read aloud the words or object the user points at. The $2,500 product is in the midst of a prelaunch, with initial users providing the developer with feedback. Eliav Rodman, director of marketing at OrCam, says the company expects to announce its official U.S. launch soon, at which time the devices will be available for general purchase.

Lechal, an Indian company, has developed smart footwear to supplement the navigational canes used by the blind. The $150 shoes and insoles will provide navigation and safety information to the wearer through vibrations. Though designed to help the blind, Lechal believes its haptic interface will also be useful to help runners monitor pace or tourists navigate unknown cities without the potentially dangerous distraction of a smartphone.

A company called Soundhawk has developed an in-ear device to enhance hearing, selling it directly to people with hearing difficultly but no medically detected hearing loss, rather than hawking the product to doctors. "We're taking a product away from the idea of being a hearing assistive device for people who have a problem to being a performance enhancement for people to improve their quality of life," Drew Dundas, Soundhawk's chief science officer, told Forbes.

When it comes to medical applications for wearable tech, there are a lot of positives, but there are still some kinks to be worked out, such as compliance with HIPAA privacy regulations.

Another big issue is data accuracy. Health-care professionals don't want the liability of acting on bad data. "This data will be used to make informed decisions about peoples' wellbeing," says Rincon of Wearables.com.

The accuracy of the data needs to be validated, and many wearables startups don't have the resources to do that, says Booth, UnaliWear's CEO. She adds that many consumer wearables are "notoriously inaccurate" – not a big deal for general fitness monitoring, but problematic when the device is part of a physician-ordered treatment plan. "You have to be able to tell the difference between a true irregular heartbeat and sensor error – and today's consumer wearables can't do that," Booth says.

Right now, few wearable startups have the resources to go through the rigorous FDA approval process, which tacks millions of dollars and many months onto the development process. But, in the future, expect more wearable tech companies to go that route, McGillin says. "There are limits in terms of the claims you can make and the areas you can treat without FDA approval," he adds.

As the technology continues to improve, tech companies will address accuracy and privacy problems. "We'll see vast adoption of wearables throughout the various stages of health care: preventive, treatment, hospital stays and recovery," Rincon says. "The patient-physician relationship will also become more involved and active as doctors gain access to the data."

Though many of the health-related wearables poised to hit the market are meant for patients to wear and doctors to monitor, that's not the only model. Several companies have come up with wearable solutions that doctors themselves can don. Software developers like Pristine, APX Labs and Augmedix have created apps for Google Glass and other smart eyewear to give doctors "instant real-time access to information and communication, all while having access to both hands, which is huge for them,"

Pristine has received a lot of positive feedback from clients who've used its EyeSight platform, says Lucas Schlager, evangelist at the company. Anesthesiologists have used the technology to monitor and manage certified registered nurse anesthetists across multiple operating rooms in real time. Residents are able to "beam in" specialists on-demand to consult in emergency rooms. UC Irvine's School of Medicine has used EyeSight to "bring a clinical perspective into lecture and teach better patient communication skills," Schlager says.

Compared to other medical technologies, like robots or computer carts, smart glasses are "far less intrusive," Schlager says. The challenge, as with any wearable tech used in a professional setting, is security. Protecting a patient's information is paramount. "Out of the box, Google Glass isn't really meant for a sensitive environment. … You obviously wouldn't want someone tweeting pictures of patients from their Glass," Schlager says. Pristine and other developers address HIPAA demands by creating a secure custom operating system for the smart glasses and encrypting any data that's transmitted from it.