The situation was truly dire, and promotional products companies had every excuse to just tunnel inward and focus on doing what they could to survive.

But the promo industry didn’t do that. Instead, it instantly sprang into action. Right away, industry firms found creative ways to help other businesses and organizations pull through. As the days and weeks wore on, they donated PPE amidst mass shortages, established response funds for their communities and implemented food drives for those hit hardest by the pandemic, many of them still in operation more than a year later.

At the beginning of the pandemic, ASI established its industry-wide #ASIcares campaign, with resources at ASIHelp.com and a matching donation drive. In May 2020, ASI asked that the industry make donations to their local food banks and send in receipts, which ASI would then match. All told, the campaign raised $100,000 for Feeding America, allowing the organization to donate 1 million meals during the pandemic. “Once again,” said President and CEO Tim Andrews after the drive, “caring people throughout our industry proved that simple human kindness will always win out, no matter how dark the day.” 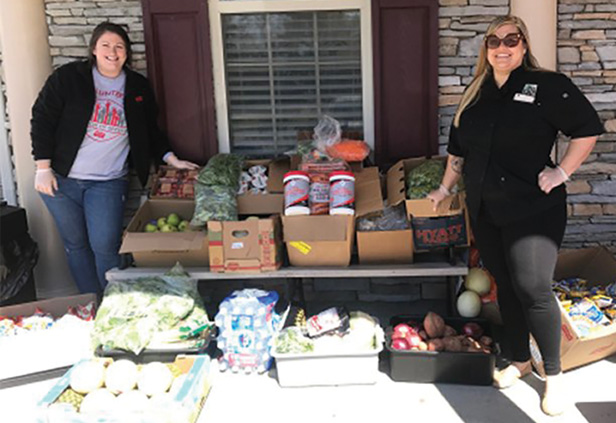 It’s why, this year, Counselor has decided to honor the entire promotional products industry for its collective charitable actions since the start of the COVID-19 pandemic. Distributors, suppliers and decorators in the U.S. and Canada proved that when difficult times arrive, their capacity for charity and compassion knows no bounds.

Protection for the Front Lines

Enter the promo industry. Even before the end of March 2020, some suppliers had become PPE production facilities. BELLA+CANVAS (asi/39590) pivoted to making 100 million masks a week and continues to donate masks to healthcare facilities and community organizations. HanesBrands (asi/59528) in Winston-Salem, NC, made millions of masks in its facilities in Honduras and El Salvador. Top 40 supplier SnugZ/USA (asi/88060) in West Jordan, UT, quickly started making masks for the largest hospital system in the state. 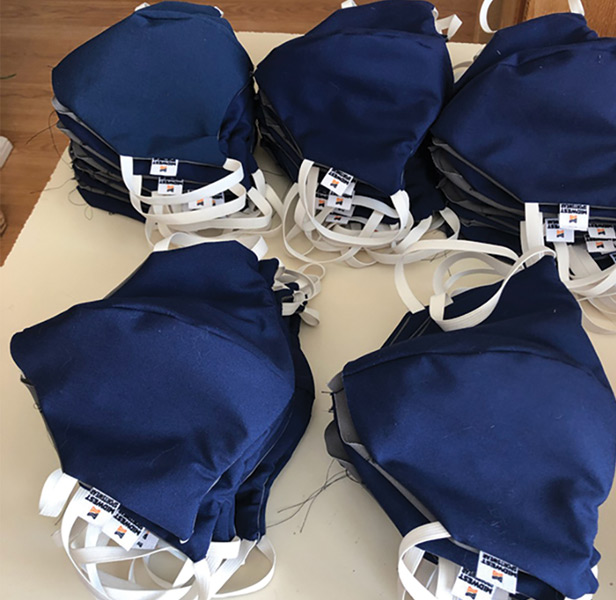 Kayla Anderson, co-owner of Iconik Etchings and Innovations (asi/62164) in Peshtigo, WI, provided more than 10,000 face shields for front-line workers. “We worked tirelessly to source material and used our own machinery,” says Anderson. “Another local company created the brim portion, so it was great to work together.”

Since the start of the pandemic, The Riviera Towel Company (asi/82647) in Santa Barbara, CA, has donated towels made of tightly woven Turkish cotton to a team of seamstresses who make masks. Each towel can be turned into 20 coverings, and the supplier has been able to provide enough material so far for more than 10,000 pieces for first responders. “We’ve donated enough fabric to create 38,500 masks,” says co-founder Albert DiPadova. “Once we started sending towels to those interested in making masks, we received requests from all over the country.” 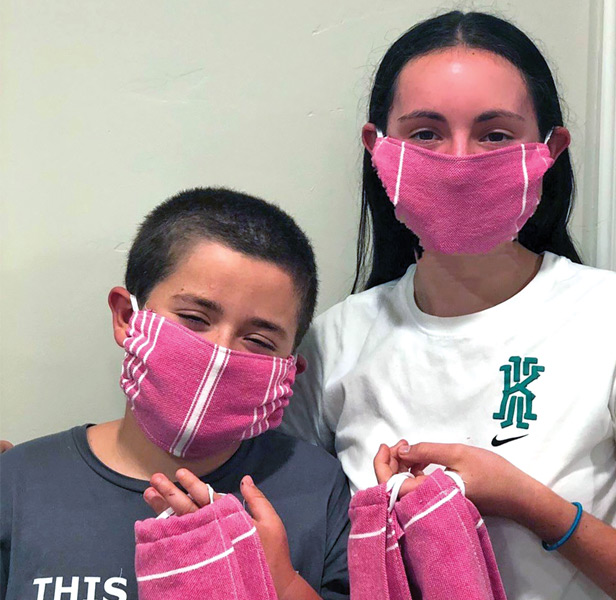 Companies also leveraged their sourcing capabilities to find vital PPE. Mike Fiorentino, vice president of sales at Elevate Brand Marketing (asi/600369) in Dallas, sourced more than 200,000 bottles of sanitizer, along with sanitizer stations, wipes, masks, shields, gloves and gowns for healthcare workers. “Because of our global sourcing team, we quickly obtained PPE and chartered a cargo plane for distribution,” says Fiorentino. “We were able to donate to local hospital units in need.”

Benefit Marketing (asi/137279) in Orinda, CA, has sourced over 10,000 masks for a local food bank, a resource center for female cancer patients and a community crisis center. “The BeBeneficial mask donation program will continue as long as there’s a need,” says President Michele Houston. “It’s terrific to be in a position to help.”

A Leg Up for Local Business

To encourage patronage of restaurants, Anderson at Iconik Etchings created a website with information on local eateries’ menus, open statuses and hours. The site got enough web traffic that the nearby city of Marinette, WI, took it over.

Before the end of March 2020, ScreenBroidery (asi/305623) in Indianapolis had already implemented its #DoYourPart campaign; the company designed three different T-shirts and used the proceeds to buy gift cards to local businesses, which were given to organizations like the United Way for people in need.

Our Place Promotions (asi/288432) in New Orleans established a campaign for local restaurants and clubs by donating branded merchandise the businesses could sell to raise much-needed funds. “Customers really wanted to support them,” says owner Gary Zoller. “We’re proud of our reputation in the community for helping the businesses that we love stay afloat in terrible times.”

Peerless Umbrella (asi/76730) in Newark, NJ, was inspired by Barstool Sports’ Barstool Fund, which has raised almost $40 million to give to small businesses struggling during COVID. “Small businesses are so important to our industry,” says Dan Edge, director of North American sales. “They’re our end-buyers, so we established a giveback program where we donated money for each booth attendee at virtual trade shows and for each distributor who signed up for a virtual meeting with us, all totaling $5,000 that we’ll donate to small businesses.”

While businesses suffered, so did vulnerable communities and the organizations that serve them, as well as front-line workers, who were under an inordinate amount of pressure during the pandemic. Through sales of its Performance Activity Mask, a moisture-wicking gaiter made of polyester and spandex, Founder Sport Group, the parent company of Badger Sportswear (asi/37876) in Statesville, NC, helped the All Clear Foundation, a nonprofit organization that supports first responders, with a $1 million donation.

“This is by far the largest philanthropic donation we’ve made in our company’s history,” says John Anton, CEO of Founder Sport Group, “and we’re thrilled to have the All Clear Foundation as our partner in this effort.”

Full Line Specialties (asi/199688) in Surrey, BC, collected food donations for Food Banks Canada. Storm Creek Apparel (asi/89879) in Eagan, MN, gave a portion of the proceeds from sales of its Work From Home apparel collection to Feeding America, providing 150,000 meals. It also gave $51,500 to charity by the end of 2020 as part of its Wear for Better charitable program.

“Giving back for the greater good is our mission,” says Derek Walters, director of brand experience for Storm Creek. “It’s part of the fabric of our company.” 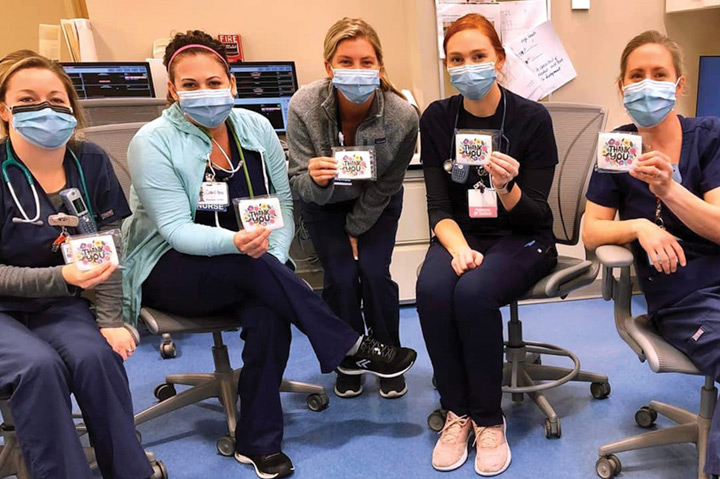 Firms also made sure front-line workers had access to food during their long shifts. Peter Agbay, partner at Wicked Good Cookies (asi/97074) in Boylston, MA, says his company distributed more than 5,000 appreciation treats to healthcare workers and first responders. “The local community sent us artwork and thank-you notes that we printed on the cookies,” says Agbay. “There was a lot of support and community involvement, which was very uplifting.”

Christine Piper, managing partner at Maverick Media (asi/264400) in Easton, PA, continues to oversee the Feed the Frontline campaign. She partnered with a local winery to deliver food to workers. “I knew that I needed to help,” Piper wrote on the campaign’s official site. “I believe showing gratitude and kindness is always the answer.”

Hardship has continued well into 2021, yet time and again, the promotional products industry has proved that its goodwill isn’t limited by one year or a single crisis. The giving never stops.