Counselor visited a cannabis trade show in New York to see how companies in this market are using promotional products. The verdict? A ripe opportunity for distributors.

Olivia Skari is doing brisk business at the GrowCo booth, handing out miniature cakes imprinted with the company’s logo. “Yes, they’re edible,” she explains for the umpteenth time. “No, there’s no marijuana in them.”

GrowCo joined about 90 other exhibitors and 2,000 attendees at the second annual Cannabis World Congress & Business Expo in June at the Javits Center in New York City. Like many businesses eager to capitalize on the growing “green rush,” the Denver-based company doesn’t deal directly in marijuana. Instead, it provides growing infrastructure and water to licensed cannabis farmers.

“Nothing gets people interested like treats,” said GrowCo’s Stephanie Huss. “But they’re not infused. That’s not what we do. We’re just intelligent business people. This is a nascent industry, but we’ve been around a long time.”

And now, they, like many other companies dipping their toes into the growing market, are expecting big returns from a sector that has the chance to really break out in the coming years. Researchers from The ArcView Group, a cannabis industry investment and research firm based in Oakland, CA, found that the U.S. market for legal cannabis grew 74% in 2014 to $2.7 billion, up from $1.5 billion in 2013. The ArcView Group further expects the market to grow more than 30% more in 2015, and as more states are forecast to legalize recreational use of marijuana, the group predicts that the overall market will top $11 billion by 2019.

While numerous exhibitors at the Cannabis World Congress & Business Expo got their “open for business” message out with imaginative promotional products like pocket marijuana grinders and flavored medical marijuana capsules (including coffee, lime and bubble gum), the key ingredient was nowhere to be found.

Instead of pot, AmeriVacS demonstrated its $1,995 vacuum sealers (“up to 360 packets an hour!”) using spinach. The Mad Hatter cannabis-infused coffee and tea company made do with 500 samples of un-spiked tea. To garner interest in its advocacy work, HighNY gave away 1,000 postcards.

Amercanex, an electronic marketplace for licensed cultivators, wholesalers and retailers run by former Wall Street workers, brought 500 branded T-shirts to the expo – its sixth show since the company started in July 2014.

“The industry’s growing so fast,” said Lisa Hopkins, Amercanex marketing vice preisdent. “Once it’s legal on the federal level, the sky’s the limit.”

Since 1996, 23 states and Washington, D.C. have passed laws allowing smoked marijuana to be used for a variety of medical conditions, according to the federal Office of National Drug Control Policy. However, using marijuana continues to be an offense under federal law and there are critical differences in marijuana laws from one state, county, or city to another. To date, four states – Colorado, Washington, Alaska and Oregon – have legalized retail marijuana.

So, as cannabis trade shows like HempCon, KushCon and High Times Cannabis Cup – the world’s leading pot expo – sprout up across the country, exhibitors and attendees have to keep track of what can be shown and sampled where. 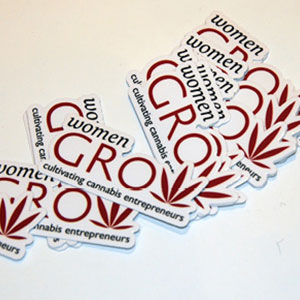 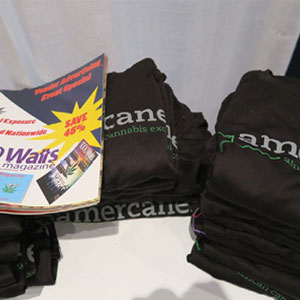 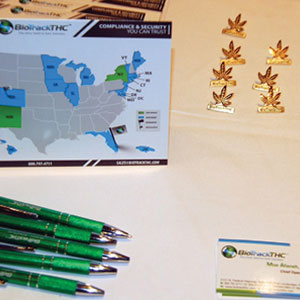 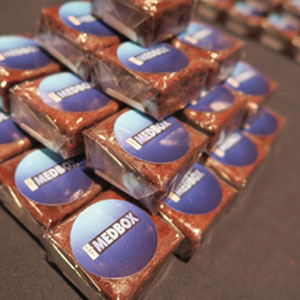 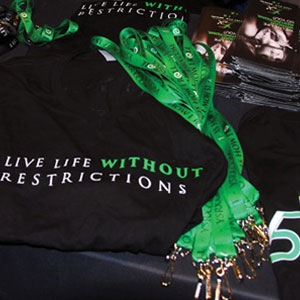 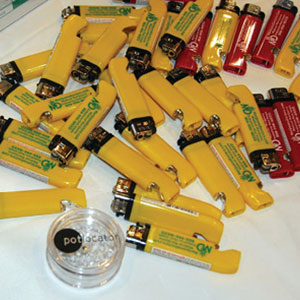 Promos on display: Exhibitors at a cannabis trade show in New York in June showed off a wide variety of promotional products in their booths.

At the June Cannabis Cup in San Francisco, any of the 16,000 attendees with a medical marijuana card could sample goodies displayed by over 400 vendors in a fenced in area – and check out winners of the annual best buds competition. But in Colorado, where anyone 21 or older can legally possess up to one ounce of marijuana and enjoy concentrated and edible forms of marijuana, open sampling was banned at its Cannabis Cup for the first time this year.

New York state won’t open its first medical marijuana dispensaries until January. So over at the Pinnacle Consulting booth at the Javits, exhibitor Rebecca O’Connor had nothing more in her arsenal than a large poster and a stack of business cards to entice browsers. “You have no idea how I’ve been pushing the free pen idea,” she said. “Or lanyards, since everyone in the industry has to wear an ID badge – and we break the lanyards all the time. If it said ‘Pinnacle” on it, that’d be really good. Lanyards are a big thing.”

To advertise its start up, BioTrackTHC, which sells medical marijuana dispensary software, distributed 500 logoed pens and 1,000 marijuana leaf lapel pins. “It’s really important right now to get the brand out there and what better way than a marijuana leaf?” said BioTrackTHC Co-CEO Patrick Vo. “It’s gold, it’s shiny and everyone wants to wear it because it’s cool.”

Although most people still associate marijuana more with Cheech and Chong than Goldman Sachs, that’s changing – fast.  At the New York show, the suit-to-stoner ratio was about 500-to-one.

“I’ve never used the product in my life,” said Daniel Derossi, an owner of Y5RX, sellers of  “the Cristal” of vaporizer dispensers, featuring extract oil equivalent to an eighth of an ounce of bud. Derossi said his company’s 40,000-square-foot Colorado facility has 18 grow rooms producing 2,000 pounds of marijuana a week.

“There have been good results with our oil as medicine,” he says. “My brother has epilepsy. A lot of vets with PTSD, it relaxes them and they can go off medications.”

On the conference’s first day, Derossi handed out 2,000 slick black T-shirts featuring his company’s slogan: “I Live Life Without Restrictions.”

The “Cannabis Means Business” conference was sponsored by the International Cannabis Association, a trade group pushing the burgeoning industry’s investment potential. According to Forbes magazine, “While the direct growth and sales of marijuana are heavily regulated, associated businesses have very low barriers to entry or expansion. There are suddenly thousands of additional customers for legal products like rolling papers and pipes. Existing small businesses like T-shirt printers, agriculture suppliers, construction crews, and marketing firms have new businesses and customers to call on.”

Still, negative drug stereotypes linger like pot smoke. “This is pretty unique for marketing,” said a 25-year-old attendee who put a lighter, grinder, pens and tea bags into a bright yellow conference bag – another popular giveaway. Like many browsers, she wouldn’t give her name, saying, “I don’t want my company to know I’m here.”

But aside from a few shirts emphasizing the high users can get from cannabis, the show floor was typical: eager exhibitors hawking wares to mostly middle-aged attendees who could also attend lectures on everything from technology, trends and legal strategies to the ins and outs of cannabis extracts and employment laws.

High on the hype, numerous companies not typically associated with selling and marketing anything having to do with marijuana are jumping on the cannabis bandwagon in a big way. “Since legalization, we’ve been at 12-15 cannabis-related shows a year,” said Scott Thompson of Colorado’s Linx Greenhouses, established in 1967. “We’re excited about it and think it’s a very intriguing market. The knowledge we’ve developed for decades we’re able to put to good use in this market. It’s the best of both worlds.”